Today we’re going to talk about diversity in books. Specifically, the OwnVoices movement.

Most of us can agree that 2016 has been a year full of turmoil, trouble, and tears. As an historian, I watched the Republican candidate’s campaign with growing horror. I could draw so many parallels to totalitarian regimes in history, and frequently I did. But you know that old saying, “Those who study history are doomed to be ignored by people who didn’t.” Or something like that.

The upshot is, we now have to face the actuality of the United States under a fascist ruler who appears to have no compassion. We’ve seen hate crimes increasing. Just today I read an article about a Jewish family in Pennsylvania being forced to flee their city because of threats. We’re seeing the very real possibility of a Muslim registry, which should frighten everyone, not just Muslims. We’re seeing legislators in North Carolina arguing over stupid things like who uses what bathroom when there are people going hungry all across America. For heaven’s sake, let people use the toilet they want to use, and start worrying about the fact that there are 22,000 veterans who were discharged for misconduct despite the fact they were suffering from PTSD, depression, anxiety, and other crippling ailments thanks to their service. 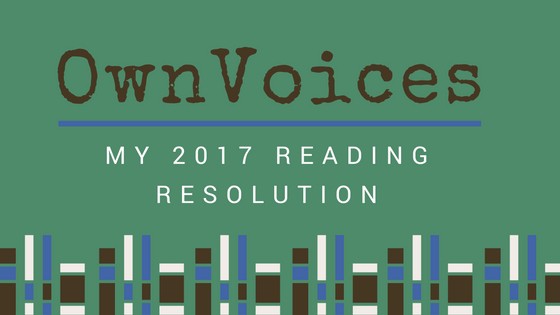 The point is, I fear that in 2017, those who are marginalized in the US are going to be even more marginalized. There are a lot of ways to take action on that, and I’m exploring several of them. One of the things I’m going to do next year is try to have OwnVoices books outnumber the books written by white, cishet, Christian males. Nothing particularly wrong with those guys, but I’ve been reading them all my life.

I’m compiling a list of OwnVoices books that have been recommended on various websites, Twitter TLs (check out the #OwnVoices hashtag), etc. This is a working list, and I invite you to contribute to it. I know there are some areas where I’m stronger (GLBTQ voices) and there are probably areas I’m overlooking. And I don’t know that I’ll read every book on this particular list. But here’s my list so far.

Obviously I prefer to read inside the speculative fiction genre, but I’m open to reading most genres, though I’m not a fan of horror. I know I need more Asian voices on my list, and I don’t think I have any non-fiction on there yet. While I don’t love non-fiction, I’d like to read at least 5 non-fiction OwnVoices books.

What books have I left off? Do you have a favorite that isn’t here? Tell me and I’ll add it to my list!