Home A Writer's Life What I’ve Been Reading: April 2018

Back in January, I blogged about what I’d been reading lately. I wanted to post an update with some more books I’ve loved recently. I’m going back to February and March for some of these.

Just to recap my reading goals for 2018, I want to read at least 50 books. Of those 50, 25 should be #OwnVoices and 10 should be nonfiction, including a complete read-through of the Harland book on the age of sail.

So far I’m at 8 #OwnVoices books and 2 nonfiction our of 24 books total. Why is it so hard to find time to read all the books when you’re also trying to work two jobs, play World of Warcraft, and write all the books??

Standout reads in the past three months:

In the Garden of Beasts: Love, Terror, and an American Family in Hitler’s Berlin by Eric Larson – I loved Larson’s Devil in the White City, but somehow I missed that he’d written another book. I have to admit, it was…frighteningly timely reading this in the era of that illegitimate election-stealer currently occupying the Oval Office. I knew, on an intellectual level, that there were plenty of Americans who had no idea of the terrible conditions in Hitler’s Germany. I knew there were terrible things being done. I knew there were people denying any trouble at all. But seeing it all through the life of the United States’ first ambassador to Hitler’s Germany was powerful.

Akata Witch by Nnedi Okorafor – I’m late to the game with some of these books. I’ve heard great things about Akata Witch, but hadn’t gotten around to reading it until this year. I’m so glad I did! Now I need to get my hands on the sequel. I particularly enjoyed reading about a character who was African but had also lived in the US. It gave me a connection to her even though we might have nothing else in common. The side characters were brilliantly written and the world immersive. I loved the unique way magic worked in this world. Masks sort of freak me out, but I loved how they were used here. Can’t wait to read more.

Tempests and Slaughter by Tamora Pierce – I must confess, I enjoyed the Wild Magic series, but they’ll never be able to compete with my all-consuming love of the Alanna books. That said, it was interesting to go back in time and back to Carthak to see Numair Salmalin’s boyhood as Aram Draper. I look forward to seeing where this story is going…but I also look forward to Tammy writing more about girl main characters again!

Children of Blood and Bone by Tomi Adeyemi – This is being raved about by pretty much everyone, and they’re all pretty much right. An epic story of stolen magic being reclaimed, this book sucks you in and drags you on a wild ride as Zélie and her companions chase lost secrets while being chased, in turn, by an out-of-control prince who is torn between proving himself and embracing the unknown. I look forward to the sequel. 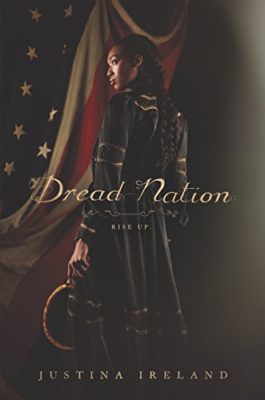 Can we just talk about how gorgeous this cover is? The colors, the American flag in the background, her defiant stance, the bloody sickle. Yes, please.

Dread Nation by Justina Ireland – I love speculative fiction and I love Civil War history. A book with zombies rising at the Battle of Gettysburg? I knew I would love it. What I was not prepared for was just How. Fucking. Angry. I would get while reading this book. Sorry for the language, but I spent a lot of this book with my blood pressure up.

I don’t want to spoil it for anyone who hasn’t read it, but it’s a book with a black main character in an alternate universe where slavery has technically been ended. Technically. Which means that black characters are often treated horribly. I got so angry on behalf of these characters. It was an uncomfortable read–which is a good thing. I never thought reading #OwnVoices books would be comfortable. That was kind of the point–to leave the world of books that make me comfortable and start challenging my worldview a little more.

I have a lot of complicated feelings about this book. I also wonder if I’m allowed to have those feelings. I mean, I’m a white girl, so I don’t think I’m part of the target audience of this book, and that makes me wonder if my own reaction to the book even matters. Many of the things that pissed me off the most in Dread Nation are things that I know happened in the actual timeline of our nation. This is a speculative novel, yes, but only because zombies. The battle schools are clearly based partly on American Indian boarding schools, which were actual schools where Native Americans were forced to take English names and Christianity and beaten if they spoke their own language.

I could probably write an entire essay on this, but again, I’m a white girl, so maybe my essay doesn’t matter. Go read Alex Brown’s TOR.com review, because she does a better job of breaking this down than I can, and she actually has a right to. I’ll just finish by saying I’m looking forward to reading the sequel to this one.

A Gentleman’s Guide to Vice and Virtue by Mackenzi Lee – I really enjoyed this book. Give me a bisexual main character, a mixed-race love interest, and a female character who refuses to conform to societal norms, and I’m a happy reader. This was sort of like Jane Austen, except with a more realistically diverse cast. This book deals deftly with chronic illness, disability, gender issues, and sexuality, while also delivering a fantastic romp of a story. There were times I cringed at Monty’s choices and actions, of course, but his character growth over the course of the story–while it’s a jagged arc–is appreciable.

The Massacre at Fall Creek by Jessamyn West – I just finished reading this for the Hoosier Authors Book Club we have at my work. This is a 1975 novel based on actual events that took place in Indiana in 1824–just eight years after we became a state. Several white men killed nine Native Americans and were actually arrested and charged with murder. This is the first recorded case of white men being executed for murdering Native Americans. Jessamyn West took a lot of liberties with the characters, making some of the murderers more complex than they might actually have been (and in one man’s case, a whole lot more sympathetic than he probably was). She takes the opportunity to explore the unique, complicated, and often painful relations between white settlers and the native peoples who were here first. She does it well, though you don’t end up really liking much of anyone in the book, which makes for a difficult read.

These are just a few of the books I’ve read recently, and either enjoyed or found challenging but worth reading. What have you been reading lately?