One of the best things about being a writer is how you can live so many different lives through your fiction. In one of my manuscripts, I have a character, Evan Maddox, who drives a brand new Chevy Camaro, because he likes loud and flashy things and has an almost reckless disregard for his own life, so he drives aggressively and fast. 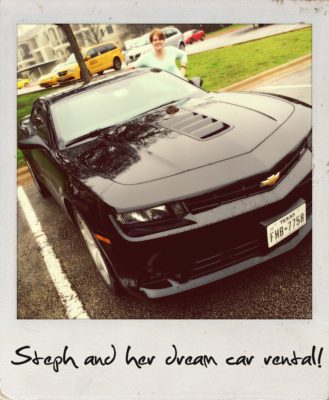 I was still wrapping up the first draft of that manuscript when I made a trip to Austin to visit a good friend and critique partner. I decided, what the heck, I would splurge and rent a Chevy Camaro to drive while I was there. After all, as a research expensive, it was completely justifiable. Even if I also like loud and flashy cars and like to drive semi-aggressively and fast. >.>

There are a lot of ways to research something. I’m a fan of internet research, but for some things, only the real experience will do.

In the case of the Chevy Camaro, some time on the Chevrolet website tells me that my personal dream version of the Camaro (a 6-speed manual with heated leather seats) will set me back about $31,000. Of course, my character Evan, who’s actually driving the Camaro, has slightly more expensive (and flashier) taste than I do, what with wanting the Performance Brake Upgrade Kit – Brembo® 6-Piston Front, 20″ 5-spoke, low-gloss Black aluminum wheels, and Magnetic Ride Control™ (which apparently gives the driver more control, which is definitely something that appeals to Evan). So his Camaro’s price tag is $52,875.

That’s great information. But that doesn’t tell me anything about how the car actually drives.

When I got in the Camaro at Austin-Bergstrom International Airport, I shivered a little bit. My rental car had like 28 miles on the odometer. It still had that new car smell.

The side windows were small, and with that and the low-slung body of the car, I felt like I was sitting inside the lovechild of the Batmobile and a Sherman tank.

I turned the key and the engine roared to life. Yes, roared. But then it backed off to a sexy grumble, like it knew it had power and didn’t need to prove it to anyone. Alpha male car, right here. Those heated leather seats showed me how much that car loved me.

I knew basically where I was going, since I had good directions from the friend who was putting me up in Austin, but the Camaro became BFFs with my iPhone right away, so not only did I have GPS instructions, but I also had U2 blasting out of my stereo speakers.

Every tiny bit of pressure against the gas pedal got a response. There was a tiny break in traffic as I had to switch lanes? The Camaro slid into the spot like it had been carved out just for me. Red light changes to green? Zero to sixty in four seconds, baby.

This car was the modern-day equivalent of a prancing black war stallion, which is exactly what Evan Maddox would be driving if he were a medieval lord instead of an HR executive cursed by the Faerie Queen. This car made me laugh at the cute Texan drivers who didn’t know what to do with a little bit of rain on the roadway (answer: drive faster to get away from them).

To be honest? If I could afford a Camaro, I’d probably drive like a dick.

Since that’s how Evan Maddox likes to drive, there’s no question it’s the perfect car for my character. But if I hadn’t driven one, I would never know things like how low the ceiling is, and how Evan probably occasionally bangs his head if he isn’t careful, since he’s taller than I am. I wouldn’t know just how responsive the steering is. I wouldn’t know what it feels like to be pressed back into your seat by that sexy acceleration.

It’s probably a good thing I’ll probably never be able to afford a Camaro, but thank God I ponied up the cash to drive one for a weekend, because my story details will be stronger for it. 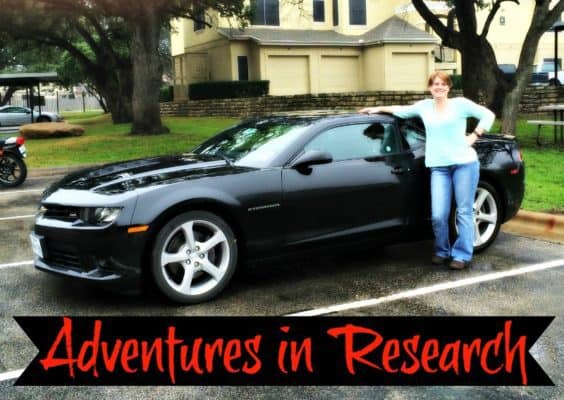