Skip to content
Home My Writing Process Hope in Fantasy

I am of the fervent belief that speculative fiction is the literature of hope. Successful grimdark authors like G.R.R. Martin and Joe Abercrombie and popular dystopian sagas like The Hunger Games notwithstanding, I believe that the main function of speculative fiction is to imagine a better world that could exist, whether it be through magic or through science.

I read and write to escape the world I live in

There are plenty of reasons to read fiction, but my main reason for reading fiction (and for writing it, for that matter) is to escape myself. It isn’t that my life is such a terrible place to be, but who doesn’t want to get away from real life every once in a while? Everybody likes vacations, and to me, reading a really good novel, one that makes me skip meals and lose track of time and forget myself, is an inexpensive vacation.

If I’m stuck in a world where every character is deeply flawed, where there are “no gods and precious few heroes,” what kind of vacation destination is that? If I have to struggle to find a character I’m rooting for, or if every character I care about dies a horrible death (G.R.R.M, I’m looking at you), how is that relaxing or pleasant?

I’m not saying I need everything to be sunshine and daisies. I’m a sucker for doomed love, self-sacrifice, and character torture in general. I love a book that can make me cry, and I love even more a book that can make me flat-out sob. But at the end of that book, I want to wipe my eyes and know that the characters who made it through are going to be okay. Maybe they’ve been through hell. Maybe they’ve lost their best friends. Maybe they’ve seen up close and personal how terrible war is. But I want at least one of the characters I love to be standing tall and unbroken at the end of the book.

I read to be part of a great story

In my opinion, a great story is peopled with protagonists I can relate to, antagonists I can enjoy rooting against, and a world that captures my sense of wonder. I want there to be elements of exploration and discovery, love, even hate, striving towards something better, something more. I don’t want characters who are so alien to my existence that I can’t find something relatable in them.

One of my pet peeves with a lot of the classics of fantasy literature, from Lord of the Rings to the Chronicles of Prydain to the Dark is Rising, is this notion that magic is dying. The elves departing for Valinor, the Children of Don having to leave if there is anything of magic in them, one going alone from the Circle, those are my least favorite elements of the books I love most. This doesn’t stop those classics of fantasy from being among my favorites to read, but it does mean I spend a lot of time lingering in the main part of the books. I routinely reread the Lord of the Rings, but I don’t always read from The Scouring of the Shire on.

What I really love is the resurgence of magic. Give me The Blue Sword’s rumors of kelar turning out to be true over the dawning of the Age of Man any day.

I love urban fantasy in large part because of the notion that magic lives on even in our everyday modern world, that there could be faeries and monsters and magic in the streets of Indianapolis or Chicago just as easily as in the imaginary worlds of Middle Earth or Narnia.

I want to root whole-heartedly for the protagonist, even when she screws up

Characters have to feel realistic. I know almost every person (with the possible exclusion of Mother Theresa) is a mix of bad and good traits. I’m pretty honest and, driving habits aside, lawful good in my orientation, but I swear a lot and I’m kind of lazy and I’m horrible about making impulse purchases. For that matter, Frodo is a hobbit with the best of intentions, but he’s got a gentleman’s classist worldview and he’s terribly naive about his quest to get rid of the ring. It’s Samwise, his working-class gardener, who never had any illusions about what it would take to destroy the ring. 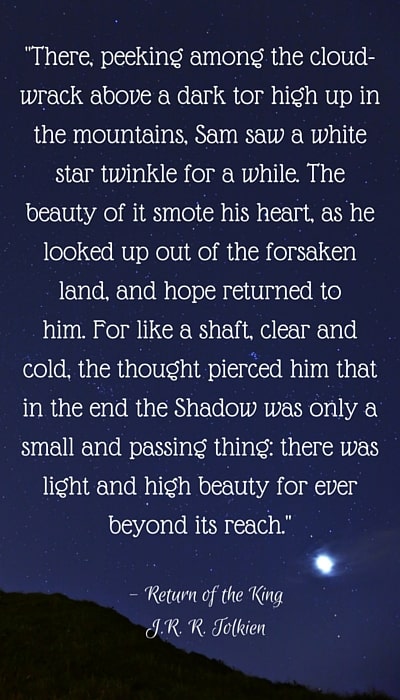 To be honest, my favorite kind of character is, well, one usually played by Sean Bean. ;) Boromir, the proud warrior with honest intentions who succumbs to the temptation of the ring because it plays on his good intentions. Ned Stark, who believes that the law must be upheld, even if it costs him his life.

So I’m a fan of flawed characters. I just want them to be relatable. I can’t root for a main character who doesn’t care who he hurts as long as he gets paid. (If he thinks that’s the kind of guy he is, or if he starts out that way and changes, that’s fine! I mean, Han Solo? Mal Reynolds? But that’s another blog post.)

I want a main character whose motivation is something I can get behind. Even if her motivation changes during the story, I want to be able to make that transformation with her. I don’t want a guy who has spent half the novel trying to destroy the monarchy to suddenly decide he’s the king’s best friend. I don’t want a woman who was sexually assaulted in the last chapter to be suddenly interested in getting busy with the hero (and yes, I’ve read that book–written by a man, unsurprisingly).

Don’t get me wrong–I enjoy reading about characters who are different from me. But there has to be something I can latch on to that is familiar to me. One of the things I love most about the TV show The 100 is that they’re able to make me find things to appreciate in almost all of the characters. I can look at kids who have grown up on a space station and imagine myself in their shoes. I can watch a guy leading an isolated nation that’s doing truly terrible things and still understand why he’s doing it, and what it’s costing him. The history major in me also loves the “first contact” themes that draw from the colonization of North America by Europeans. (Seriously, if you’re not watching that show, you need to start.)

Realism doesn’t have to mean grimdark or gritty

Don’t mistake my desire for hope for a distaste for realism. I definitely like elements of realism in my fantasy. If you have your hero ride a horse at a gallop for thirty miles, I don’t want that horse to be spoiling for a race unless he’s Shadowfax or some other magical horse. I don’t want an army to go on the march without thinking about logistics or how they’re going to feed their soldiers (thank you, Elizabeth Moon, for dealing with this so adroitly in The Deed of Paksenarrion).

But just because something is realistic doesn’t rule out hope. Without hope, I don’t think any of us would bother to get up every morning and go on with life. And maybe the character’s hope isn’t even for survival. Maybe it’s just hope that she can make a difference in the world before she dies. She could be facing down the final battle, knowing she’s overmatched, but determined to go through with it because she can’t betray her beliefs. That’s a kind of hope in itself.

Hope can come at the end of all things

In my opinion, one of the most beautiful passages in all of fantasy literature occurs in J.R.R. Tolkien’s Return of the King, Book 6, Chapter 2, “The Land of the Shadow.” Samwise and Frodo are deep in enemy territory, hungry, thirsty, and exhausted, and Frodo is growing weaker under the burden of the ring. And yet…

Far above the Ephel Duath in the West the night-sky was still dim and pale. There, peeking among the cloud-wrack above a dark tor high up in the mountains, Sam saw a white star twinkle for a while. The beauty of it smote his heart, as he looked up out of the forsaken land, and hope returned to him. For like a shaft, clear and cold, the thought pierced him that in the end the Shadow was only a small and passing thing: there was light and high beauty for ever beyond its reach.

Every time I read that passage, it smites my own heart. Isn’t it a beautiful image—the thought that, no matter how desperate the situation, no matter how powerful the enemy, no matter how discouraged the main character, there is “light and high beauty for ever?” I know that’s the sort of universe I want to spend time in.

What about you? Do you, like me, prefer the Fantasy of Hope? Or are you a Grimdark Forever kind of person? Rec me your favorite hopeful fantasy (or SciFi) novel!