In addition to being a fantastic artist and a professional, Nicole Cardiff is a fun and interesting person. I had a few questions I wanted to ask her about her process, which gave me an excuse to do an interview with her for the blog. So without further ado, here’s my interview with Nicole Cardiff! 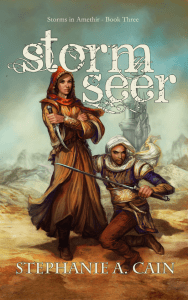 A: Usually they’re pretty fast thumbnails based on what the author or art director described to me, sketched out in Painter IX (I find drawing in Painter more pleasant than Photoshop, generally) and then I lay in a couple of text variants so that I can make sure there’s enough space to accommodate the title and author’s name. I do three or four of them for most cover projects, aiming for a few different compositional flows through the piece. I also pull up a few similarly themed covers, to see if there’s any really great solutions other people have used; for example, for Stormseer, I took a look at Whelan’s cover for Cherryh’s Faded Sun series, the cover for Brett’s Desert Spear, and Downum’s Kingdoms of Dust.

A: Digital, hands down. I haven’t really done much beyond the occasional life drawing and sketch traditionally in years; digital just allows for far more tweaks and changeability than anything else, so especially for professional projects, it saves me a lot of grey hair and redrawing. I do love seeing other artists’ oil paintings and sculpture, though, and I occasionally do leathercrafting when I get the itch to push something around other than pixels.

Q: How do you compose an image differently for a book cover compared to a regular piece of art?

A: All the text has to be planned for, for one thing – on an average paperback, at least a third of the front either has to be a consistent value, so that text can be overlaid on it and still be legible, or there has to be a big design element behind most of the text to accomplish the same thing. I’d also say cover art generally tends towards more straight-on character portraits or a slightly lowered perspective – I’ve never done a bird’s eye view for a cover, for example, although I’ve painted one or two for other projects. Covers are almost always focused on connecting with the characters, especially with the current visual trends in fantasy; crowd scenes and cityscapes are relatively rare.

A: The most challenging part is probably the initial color block-in – I have to make sure that everything stays readable in a tiny thumbnail (since after all, most people look at these things online, and they need to read clearly when they’re little graphics.) Additionally, if I’m doing a series, they can really get shackled to one color scheme for all the books, and it gets tougher to find something new and engaging to do with it by the fourth or fifth round. The easiest part is definitely all the detailing. At that point, it’s just a few days mellowing out with podcasts until I’m happy with the piece and can send it off for a final verdict. 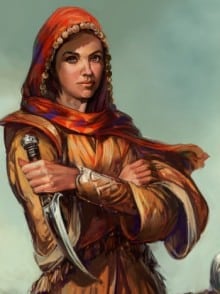 A close-up of Azmei with her coin scarf

Q: What was your favorite part about the Stormseer cover? What was the hardest part?

A: I got to pose with the (fairly heavy) curved sword I’d bought for Halloween a few years ago – I usually pose for everybody when I need reference and my husband wields the camera – and work in my love of coin scarves. I had a brief flirtation with belly dancing after watching Rachel Brice, and she can move in some unreal ways that I think would suit an assassin in training. Hardest part was probably making sure the stone structure was rendered correctly while not being too prominent in the background – it initially was a good bit darker, which made it look like it was too close to the characters.

Q: How long does it take you to create a piece of art? Do you work on a single piece from start to finish, or do you prefer to alternate between two or three pieces?

A: Usually for covers, it’s around two weeks; in an ideal universe, I prefer to get a piece to the point where it needs client approval, and then work on another one until I can lob that ball into another person’s court. Especially when I’m close to finishing a piece, it’s nice to just polish it until it’s done, since that’s my favorite part.

Q: Do you have specific artists or schools of art that have influenced you?

A: The Orientalists, and specifically Gerome, did beautiful visions of the Middle East and Egypt that I think are still unparalleled; his compositions are beautifully elegant and his skin tones are just lovely. I was able to see a lot of his paintings in person a few years ago at the Getty, and it was humbling to see how much amazing work he produced. N. C. Wyeth and the Brandywine artists are also big heroes of mine; I used to paint so many pirates in imitation of him. The drama he could lend characters is remarkable. In contemporary terms, Dan dos Santos and Donato do lovely covers, and I try to learn from their example of how to handle a balance of painterly color and realism, and Greg Manchess does beautiful action scenes in the Brandywine tradition that I love beyond words.

Q: A writer can get story ideas just about anywhere, from a news story on NPR, a snippet of conversation you happen to overhear, or even drawing from an incident in your own life. Is it the same for artists? Where do you prefer to find inspiration?

A: Usually from something I’m reading or watching – I keep kicking around a color sketch based on the Vikings show, and I’ve done a lot of paintings based on something I read (although I try to keep it loose, since I don’t want to step on anyone’s copyright toes.) Video games also occasionally crop up – you can probably look through my gallery and pick out when I was playing Skyrim, Bioshock, and Assassin’s Creed.

Stephanie’s note: Yes, and I suspect it’s those pieces influenced by Assassin’s Creed that made me contact you about a commission!

Q: If you could do a movie poster or book cover for a story that’s already been told, what would it be?

A: Oooh. For movies, I’d love to have an excuse to do a pseudo-Drew Struzan for Star Wars, or maybe Pitch Black; for books, the list is pretty long (I actually did Dresden and Dune fan art years ago) but I’d love to do covers for Patrick Weekes, Scott Lynch, Guy Gavriel Kay, or the 1001 Nights. 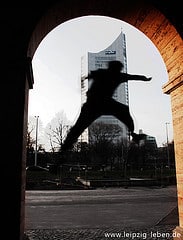 Q: What’s the question I haven’t asked that you wish I had asked?

A: I think it’s important to at least try to do the stuff I paint, in order to give it some authenticity, which has led me down some fun roads – I took longsword lessons for a few months, tried out archery and parkour briefly, and did sport fencing for a year in college and a bit in LA. So far kickboxing/muay thai is the thing that stuck, though I have yet to be commissioned for any Daredevil-style fights. One day!

This interview has made me realize that Nicole is even cooler than I thought. I think parkour looks amazing, but I am way too scared to ever try it (I’m super clumsy)! And I love that Nicole tries out the poses and does reference photos before drawing them. (If you haven’t seen the posts on Jim C. Hines’ blog where he poses like women on book covers, you need to check those out!)