How I’ve Started Writing Every Day

Everyone has seen the advice that writers should write every day. I’ve never believed that taking a day off here and there is as much of a sin as a lot writers seem to think. But then again, I’ve also never been as productive (or as published) as those writers who say you need to write every day. This year I have finally buckled down to the resolution of writing at least 500 words every day. So far every day of 2015 I have written at least 500 words. I know we’re only 24 days into the new year, but I want to share how I’ve managed to do this so far.

I tweeted this yesterday, and a few people have favorited or retweeted it, and I really want to expand on it. So here goes.

This isn’t actually the most motivating of my productivity tools, but it’s definitely a fun one! I love milk chocolate Hershey’s Kisses, and since they’re so small, I tend too eat too many of them at a time. :D Several months ago I decided Kisses are a good R+ (positive reinforcement–thank you, Laura) tool for me. So for every 250 words I write, I get to eat one Kiss. A serving size of Hershey’s Kisses is 9 Kisses, so that means if I eat an entire serving, I’ve written 2,250 words. I’m not good at math, but my calculator tells me that if I eat one serving of Kisses every day, I will have written 821,250 words in 2015. That’s between six and nine novels.

That’s a lot of words!

Now, I don’t expect to write that many words every day, which is probably good for another one of my 2015 goals, which is to keep fitting into my jeans! But even if I only write 500 words a day, which is my actual goal for 2015, I will have written 182,500 words, which is probably two novels, depending on genre (my urban fantasy tend to weigh in around 80,000 while my epic fantasy can be much longer). And there have been days where I would have stopped around 600 but then I realized I could have another Kiss with just 150 more words… that turned into 400 more words…or even more!

Chocolate is a pretty powerful motivator.

This is actually just one hashtag of twelve–one for each month of the Monthly Twitter Writing Challenge. On December 7 I saw this tweet from A.K. Lindsay about the #DecWritingChallenge:

Week 1 of the #DecWritingChallenge has flown by. Why does it feel like I’ve made no progress? Oh, right. I’ve been #amediting.

I immediately asked her what it was, and she replied with the link to the website. Thank God for A.K. Lindsay! I signed up and managed to write a lot in December, but not every day.

My favorite thing about NaNoWriMo is that for one month, there’s this amazing community of writers who all have the same goal: Write at least 1667 words every day. But that’s a difficult pace to keep up for someone who’s working 40 hours a week, which is why I love that the Monthly Twitter Writing Challenge’s quota is 500 words or 1 hour of editing. (Though I do dislike the amount of editing time, because I can write 500 words in about 20 minutes if I’m on a roll, so I’m not tempted to edit if I’m short on time one day.)

Anyway, my point is, the Monthly Twitter Writing Challenge ensures that I have an amazing community of writers who all have the same goal every month of the year, and they’re only a hashtag away. It’s also had the nice side effect of getting me more active on Twitter, which is something I’ve been meaning to do for a while.

By now you can probably see a trend with my productivity methods: they’re all stolen from someone else. :D In this case, fantasy author V.E. Schwab–and I need to remember to buy her books to thank her for this method.

This method is one that I’ve been wanting to try since November.

We had an important local election this November, and I was excited because my tiny little polling place (total number of voters is two townships with a total of about 3000 people, I think) had “I Voted” stickers. That voting sticker got worn on my sweater all day and went into my planner on November 4. I was that kid who had a three-ring binder full of my sticker collection, but I think the voting stickers prove that the desire to be rewarded for good behavior with a pretty sticker is something you never grow out of. 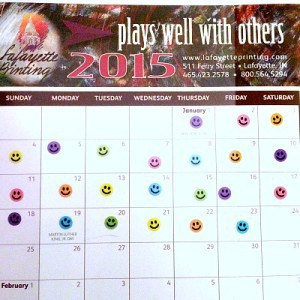 The writing calendar stuck to the wall by my desk

So you really need to watch the video I linked above, but the gist of it is this: if I write on a certain day, I get to put a sticker on that date on my calendar. It happens I got a neat free calendar from a printing company my work uses, so I stick a full-size Post-It pocket on my wall and put the calendar in there. Then I went out and bought several sheets of stickers the right size to fit in each daily box.

This is what my 2015 calendar looks like right now. It’s amazing how good it feels to add that sticker each evening.

And now it’s become instinctive for me to fire up Word or pull out a notebook and one of my fountain pens and make myself write at least 500 words. Sometimes more. How many more?

And how do I know how many words I’ve written? Well, that leads me to the last thing in my list of writing productivity methods.

I have no memory of how I stumbled across this. I know I found it early in 2014, but I only did a fair job of tracking. I know I wrote some words this summer, but June has nothing in it. June was a rough month. My aunt was in the hospital for a minor surgery that ended up almost killing her, and as a result I spent a lot of time in hospital rooms and waiting rooms, or taking care of stuff for my mom so she could spend time in hospital rooms. But I know I wrote something.

I’m getting off-topic. The point is, women’s fiction writer Jamie Raintree has put together an amazing spreadsheet that tracks your writing progress over the course of an entire year.

Maybe it’s because I spent about 7 years working in accounting offices, but I’m addicted to spreadsheets. I use a spreadsheet for NaNoWriMo that I adapt for every project I work on. I use a spreadsheet to track my novel plot so I can make sure the progress of each subplot is even and the scenes and chapters are roughly the same length. And however I found out about Jamie’s spreadsheet, I am in love with it.

The Writing Progress Spreadsheet has 14 sheets: one for each month, plus a sheet for project titles and a yearly totals sheet. You can specify up to eight projects. I have one for each of the novels I want to write or revise this year, plus one for my blog (you’d better believe I’m counting these 1500 words!) and one for the various short stories I write this year. 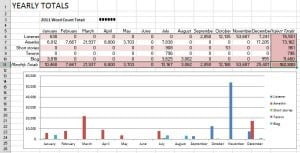 Looking back at 2014, even knowing that I forgot about the spreadsheet in June, I can see that my progress was pretty uneven. And I can definitely tell that NaNoWriMo really ups my word count. But you’ll also notice that December was a good month for me, partly because of the Monthly Twitter Writing Challenge.

I can’t wait to get to the end of 2015 and look back at my writing progress for the year. I hope the graph won’t be as uneven as last year’s, but either way, I already know I’ve outwritten last year’s January!

You know, I don’t read women’s fiction generally, but I probably ought to buy Jamie’s books just to thank her, too.

So I lied. I have one more tool in my arsenal of writing productivity methods.

I do most of my writing in the evening, because I. Am. Not. A. Morning. Person. I’ve learned to accept that about myself. I’m doing good if I manage to get up, shower, brush my teeth, get dressed, and get to work on time. This year I’ve started trying to get up early enough to squeeze in the 7-Minute Workout before my shower, because of that goal I mentioned earlier of keeping fitting in my jeans. And let me tell you, it’s rough trying to fit in seven extra minutes. I’m just not a morning person.

So every evening I have RescueTime set up to block Internet access from 8-10 pm so I’ll be forced to open Word and write. I’ve been doing writing sprints with my Twitter friends Ginny and Natalie. And when I’m done writing for the night, I have a new ritual.

I open my project spreadsheet and update it to find out how many words I wrote. I Tweet my word count with the #JanWritingChallenge hashtag. I update the Google Sheets spreadsheet for the Monthly Twitter Writing Challenge. I type the number in my Writing Progress Spreadsheet. And I put that sticker on my calendar.

Not gonna lie, it feels amazing.

I look forward to that moment every night, and I don’t want to have no word count to report at the end of the night, so even on the nights when I don’t feel like writing, I plant my butt in chair and write anyway. So far, the muse has showed up every time.

Right now, my second draft (the one the beta-readers will see) of Stormseer is just over 51,000 words long. That’s already longer than Stormshadow and I don’t think I’ve quite reached the halfway point of this novel. Yes, it’s going to be a novel by the time you read it, not a novella or a novelette or a short story. And I am hoping to get it to the beta-readers in February so you can read it in March.

And right now, I’m going to log my blog post word count in my spreadsheet and go do some sprints!