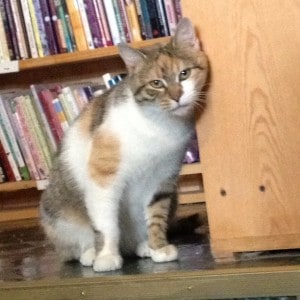 Back in late January we had several nights of single-digit temperature, and we finally lured our stray cat inside. Didn’t really need another cat, since I already have Eowyn and Strider, but the stray was a gorgeous, purry, sociable calico, and there are coyotes around here, so we hate seeing strays anyway.

Of course, what we didn’t know at the time was that we were welcoming in not just Patches, but her just-conceived children.

Fast-forward to March 24, when our three cats became ten. Patches gave birth to seven beautiful kittens.  Because her favorite hiding place was under the wardrobe, we named them Narnially–Peter, Edmund, Susan, Lucy, Eustace, Caspian, and Diggory.

Lucy is living up to her nickname of “the Valiant”. Susan, however, is making her “the Gentle” nickname ironic, because she’s quite a biter. And Diggory is the embodiment of curious, observant Professor Kirke.

Of course, the kitten everyone falls in love with is Peter. We’ve been calling him Sir Peter Whitepaws because of those adorable little white toes, though over the weeks we’ve shortened it to Peterpaws. Edmund also has those white toes.

The ginger boy is Eustace. What’s funny is that he’s kind of whiny compared to the other kittens (except Susan, who out-mews even Eustace), so the name kind of fits. :)

The twins are Caspian and Susan. Caspian had one eye get a little infected and stuck shut when he was two weeks old, which is why he got named after the seafaring king.

The kittens will be six weeks old on Sunday, and they’re adorable. Little time-suckers, of course, because every time you go into the kitten room, a mob of small bodies comes running to say hi. Tomorrow Sir Peter Whitepaws gets to meet his new mom and dad; they’re coming to visit, though they won’t actually be taking him home until probably the first weekend in June. 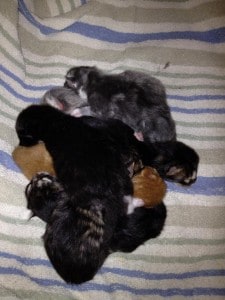 I’ve always adopted kittens, whether as barn kittens from friends or as shelter kittens, but I’ve never had a litter of kittens before. All the reading I’ve done, though, suggests that kittens should be with their mothers at least for 10 weeks. Some websites even say 12 weeks, but it’s expensive feeding 10 cats, and I don’t want the new parents to miss out on all the kitten days.

Strider and Eowyn aren’t very happy about having all these interlopers in the house, though. I was hoping they would get used to Patches at least, and I confess, I originally thought I might keep Eustace, because I do love ginger cats. But even before the kittens were born, Eowyn wanted nothing to do with Patches. Eowyn is an incredibly jealous cat. I had her for a week before I brought Strider home, and even adopting them as kittens, I had a little trouble with them. She is incredibly attached to me (she suffered horrible separation anxiety as a kitten, and even now she gets stressed out if I leave her too long) and automatically dislikes anything that looks like it threatens how much I love her. I keep telling her I could never love her less, but as smart as cats are, she doesn’t seem to get it. ;)

We have three kittens spoken for. I’m not sure what we’ll do about the other four. I’m tempted to try to rehome Patches and keep one of the kittens, in the hopes that Strider and Eowyn will accept the permanent addition of a kitten more easily. But Patches is such a sweet, affectionate, purry cat that we hate to give her up.

At least we have another month before we really have to start worrying about rehoming them. In the meantime, I’m more than happy to spend a couple of hours a day enjoying the antics and cuddles of seven magical kittens.