The last time I was at Spring Mill, I was about 10 and we were camping there. We did a LOT of camping when I was younger. We only had one car, and Mom didn’t work until I was in fifth grade, so a lot of times we would take Dad to work on Friday mornings, then spend the day getting ready and packing the car. Then we’d pick Dad up from work and head straight to Shades or Turkey Run or some other state park, and spend the weekend there. Of course, back then it was like $6 a night to tent camp in a state park. I think it’s a little more now. Anyway, when I was about 10 we spent two weeks of Dad’s vacation driving around the state, spending a day and a night at a different state park. The night we were at Spring Mill, a terrible storm came up–the sort that comes with winds so ferocious they kick up a lot of dirt into the atmosphere and cause red lightning. In fact, I think Mom even took some pictures of red lightning during that storm. In any case, we felt it was prudent to sleep in the car rather than in the tent, because of the weather. Our car was a two-door Mazda hatchback, way before Mazda’s were all zum-zum and cool. I was by far the most comfortable person, as I had the whole backseat to myself. Right at the height of the storm, a group of people on motorcycles drove into the campsite next to us and started frantically setting up tents. Poor guys.

We’d been looking forward to the caves, of course, but as you can see in the pictures, Donaldson Cave and the Twin Caves all have water running through them. When we got to the Twin Caves, the boats were docked, filled with several inches of water in the bottom. I specifically recall the naturalist telling us there had been six inches of rain, but I’m not sure if it was all during that single night, or if there had been some rain the day before. We went to Donaldson Cave, hoping that would be better since there’s a boardwalk and part of the cave is dry, but the boardwalk was under a couple of inches of water as well. The creek was positively roaring out of Donaldson Cave with incredible, awe-inspiring force. There are some rocks in the creek bed (my childhood memory was of them being car-sized, though yesterday’s trip suggests they are probably more the size of…erm, shopping trolleys.) and when the water hit those rocks, it sprayed up into the air in huge white fountains. Trail Four goes along the creekside, and I remember we hiked along it, though we had some difficulties since the actual trail was underwater. I also vividly remember all the pawpaw trees along the creek, and I did see them yesterday. Finally, we realized we couldn’t follow the trail route any longer and still be safe, so we cut up the hillside (a very very steep hillside) to get up to the road.

Mom took lots of pictures that day, but we have an entire box of pictures that have gone missing, probably in one of the attics, though I’m not sure. (I did find one box of photos this summer, so instead of my entire childhood being missing, I now have before my birth through about age 8 or 9, but 9 through 16 is still, sadly, missing.) I’ve been yearning to look at those pictures, and after yesterday I definitely want to compare them to the ones I took. Dad told me that we went back to Spring Mill a couple of days later on our trip and that we were able to take the boat ride in the Twin Caves that time, but I have no recollection of that–you can tell it was the first trip that really made an impression on me.

Then again, this was also the trip where we meant to end with a night at Brown County State Park…but we went to the nature center before getting our campsite, and there we saw a copperhead that had been caught in the campground that morning. I got to watch it eat a mouse, but because Dad is terrified of snakes, we ended up going home that night.

Donaldson Cave, the only one the general public can still enter without a special permit or a guide. 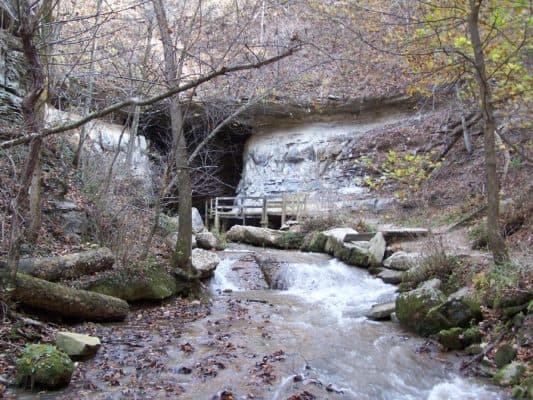 I wanted to go up here, but unfortunately, there’s no getting to it. Dad says he thinks there used to be. 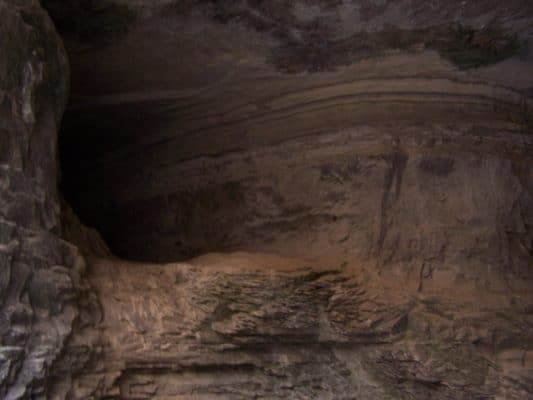 Mom & Dad go up the stairs into the cave. 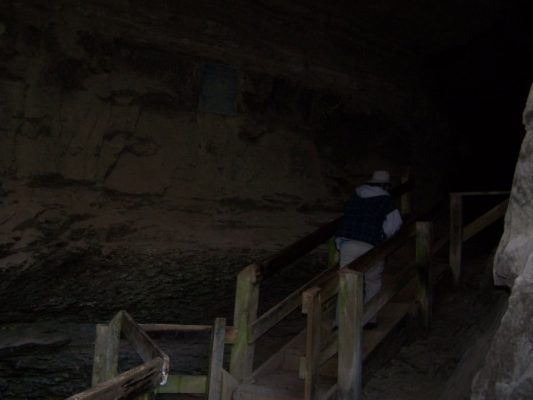 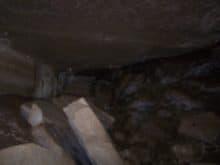 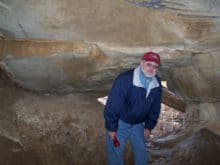 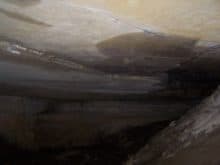 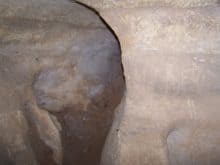 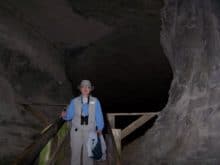 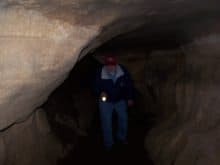 A tiny little tunnel where we eventually struck water, and finally stopped because we were unwilling to crawl. 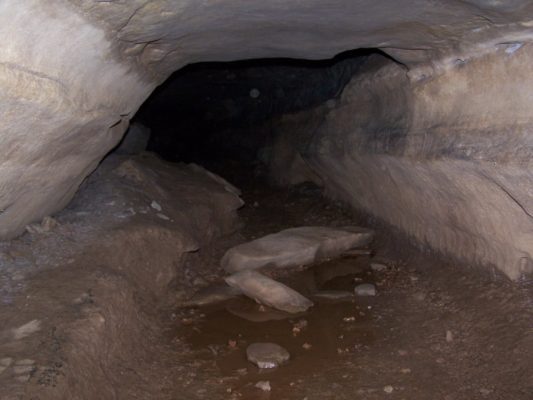 Me by a smaller opening to the cave 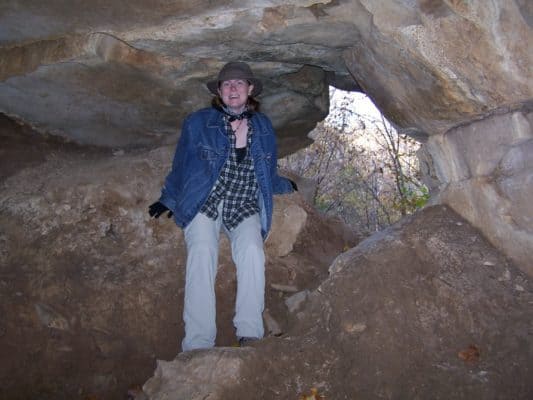 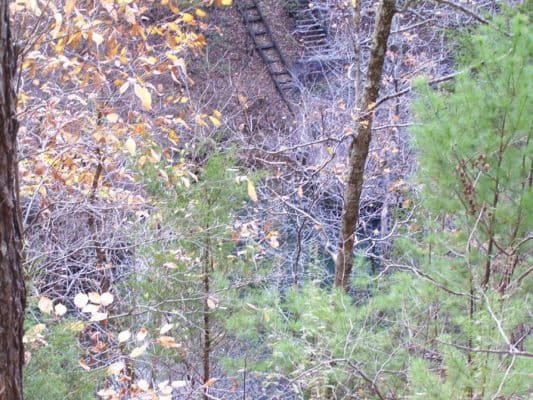 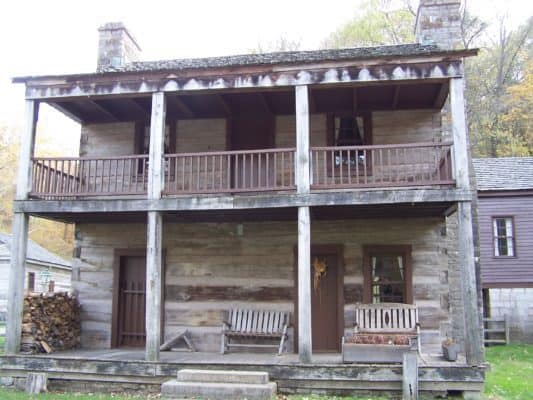 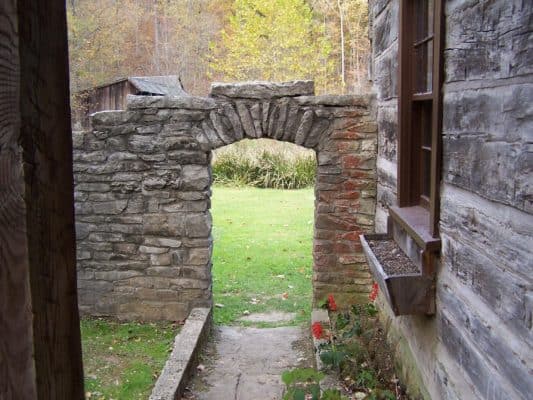 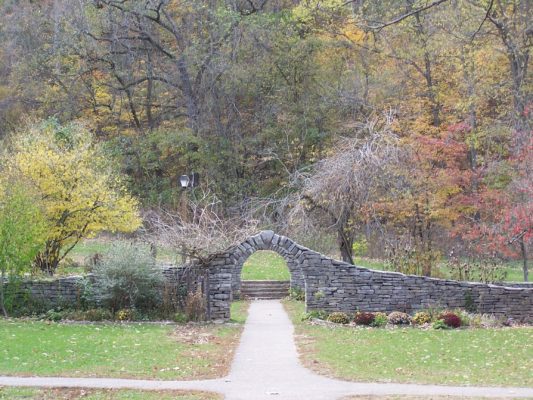 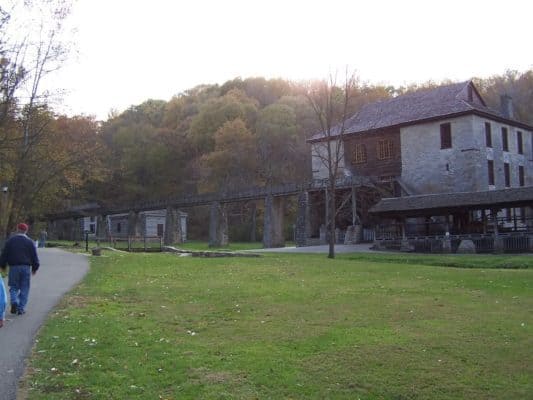 The Twin Caves, which are usually flooded enough that they give boat tours. You can see here there’s no way you could take a boat on this–there isn’t any water, just mud! 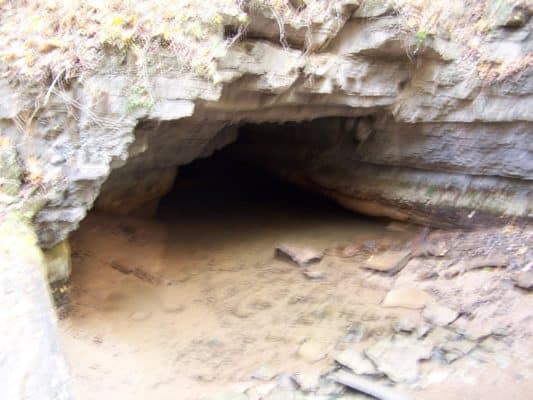 I think this is a dam between the two cave openings. 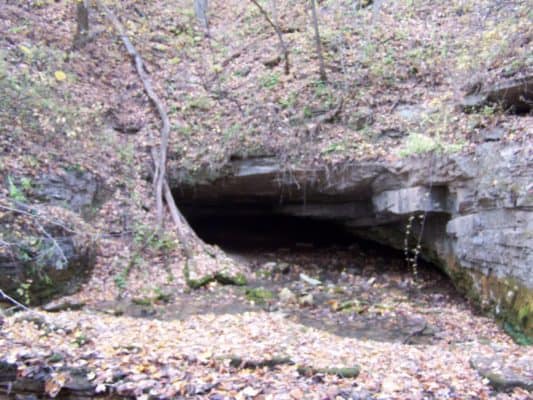