I’m thrilled to share with you the cover of my Storms in Amethir Books 1 – 3 Omnibus!

This collection has everything I’ve published so far in the series, plus an original story written just for this omnibus! I’ll probably have the story available on its own for $.99 at some point in the future, but I’m focusing on this omnibus and The Weather War right now, so I’m not sure when. Besides, why not buy the omnibus for the same price, and then you’ll have all of it in one place? 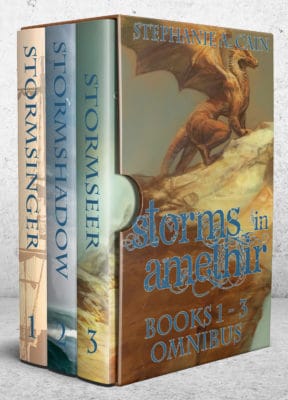 The contents of the omnibus are:

As it turns out, Lo and Arama have their own set of fans, and I wanted to spend some time exploring how things changed between them in the background. Having only Azmei’s point of view to go on, it’s hard to see, so the box set was the perfect chance for me to write that little behind-the-scenes story!

It’s available for preorder right now for only $0.99, and it will release on January 31!

At some point, the omnibus price will rise to $5.99, but I haven’t decided exactly when yet. I want to make sure all my fans, blog readers, and friends get a chance to snap this up at the debut rate, since so many of you already have most of these titles.

So what do you think of the box set cover? I created it using art by Nicole Cardiff from the wrap-around back of Stormseer‘s print version. The box set graphic was created by Mark at CoverVault.

I hope you’re as excited as I am about this! If you are, hit the button below to pre-order the omnibus at its debut price!