People who read my blog probably already know I’m a huge fan of Laura VanArendonk Baugh, who writes fantasy and historical fantasy and also happens to live close enough to me that we hang out on a regular basis. She just recently revealed the cover of her forthcoming novel Con Job, and I’m thrilled to say I am one of the lucky beta-readers for said novel. You can see the cover, but I know what happens! ;)

All gloating aside… Laura asked me to be part of a blog chain she’s doing, and she didn’t even have to bribe me to get me to agree. (Though if I’d really thought about how difficult some of these questions are, I might have at least demanded chocolate.)

So let me start off this post by telling you a little about Laura:

Laura was born at a very early age and never looked back. She overcame her childhood deficiencies of having been born without teeth and unable to walk, and by the time she matured into a recognizable adult she had become a behavior analyst, an internationally-recognized and award-winning animal trainer, a costumer/cosplayer, a chocolate addict, and of course a writer.

So last week, Laura posted her own answers to the questions I’m about to answer, and this week, it’s my turn!

What am I working on?

Do you mean what am I actively working on, or what am I letting simmer on the back burner while also tossing ingredients into my main dish?

I am actively working on Stormseer, which is the sequel to Stormshadow, a novella that is with my beta-readers in preparation for publication early this summer. Stormshadow is, in turn, the sequel to my published novelette Stormsinger which I wrote sort of by accident for J.A. Konrath’s 8-hour e-Book Challenge last August.

The reason I say accidentally is that at the time he issued the challenge, I was working on The Weather War, an epic fantasy novel about pirates and civil wars and weather magic. When I heard about the challenge from Laura (who is clearly an enabler as she not only turned me into an indie author but also has me blog hopping), I decided to write a quick story set in the same world as The Weather War. About 8500 words later, I had a story that demanded a sequel. So about 50,000 words later still, I’ve admitted this is a trilogy of prequels.

Of course, I have other projects in various stages right now. I have an urban fantasy novel set in Illinois and involving various Fae characters currently on submission. I have an epic fantasy awaiting feedback from a couple of last-stage critical readers before I polish it for submission. And I have an epic fantasy novella in the last stages of editing for publication late this summer.

How does my work differ from others in its genre?

Strong female characters are characters who are three-dimensional. They know being female isn’t a dichotomy between virgin-in-need-of-rescuing or slut-who-uses-sex-as-a-weapon. They are women who think for themselves, sometimes do resort to violence, usually don’t resort to violence, feel sad and cry sometimes, fall apart over losing a loved one, pick themselves up after losing a loved one, and continue on from day to day.

Also, I write about female pirates and whales. Do you know anyone who writes about whales these days? :)

Why do I write what I do?

A lot of it goes back to my childhood. My parents are both readers, and my dad, in particular, was a fanboy. He played 1st Edition D&D and Traveler, went to GenCon 20 years before it moved to Indy, and read out loud to me. The books my dad read to me were things like the Chronicles of Narnia, The Hobbit, Lord of the Rings, Stephen Lawhead’s books, and other classics of fantasy.

I got hooked early, and I had the good fortune of having Tamora Pierce come along with Alanna: The First Adventure when I was ten and starting to read more than just horse books. As much as I love Lewis and Tolkien, they probably haven’t influenced me as much as characters like Alanna and Daine and Robin McKinley’s Aerin and Harimad-sol.

How does my writing process work?

I can’t tell you how many times I’ve been told, “Real writers write every day.” Eeennnnh! Not true. I work 40 hours a week, have cats to take care of, spend time with friends, and have social and family obligations that sometimes take precedence over writing. I wasn’t born independently wealthy, so there are some days I just don’t have enough hours to fulfill all my obligations, get a semi-decent amount of sleep, and write. 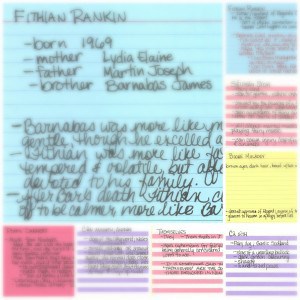 That said, I do try to write every day. My goal is 500 words a day. I have a spreadsheet from the fantastic Jamie Raintree that I use to track my writing. If you ask her nicely, she’ll probably email you a copy too. When I look at my speadsheet for this year, I can see that I’ve written 48,872 words as of today, April 9. When I divide that by 99, which is today’s number, I see that I’ve averaged 493.6 words a day. Not bad, right? I haven’t written every single day, but I’ve still managed a decent number of words.

So how does my writing process work? Not daily, but then again, I frequently have days when I write upwards of 5,000 words a day. As long as I’m making steady progress on my goals, I’m fine with that.

I became a plotter over 10 years ago when I did NaNoWriMo for the first time. I use index cards to plot–colored ones for character information like physical description, motivations, personal quirks, etc; and white ones for plot, one per scene. Ever since, I’ve plotted like that for anything longer than a short story (I’m still very bad at short stories. Even the keeping them short part.)

My writing process changed dramatically about two years ago when I encountered a blog post by Rachel Aaron (which she has since turned into a very useful writing book). She was writing about going from 2k words a day to 10k words a day. That wasn’t really an issue for me–ever since that first NaNo, I knew I was capable of 8k days. But being excited about it? That was where the blog post helped me. She talked about a triangle of knowledge, enthusiasm, and time. At that time, I was working part-time and trying to finish a novel, and my enthusiasm was significantly flagging. I learned from Rachel’s blog how to recapture my enthusiasm, for which I will always be grateful.

You can probably tell, I don’t write much short stuff. And I like talking about myself. But I have someone else I want to talk about before we’re done here. I’m not the last person in this blog chain! The next person who will be posting about this is another friend and writer I enjoy, Elizabeth McCoy! Elizabeth writes all kinds of great speculative stuff, but my favorite work of hers is Queen of Roses, a fantastic science fiction story about an AI accountant who suddenly finds herself running a ship and dealing with passengers run amok! Look for Elizabeth’s blog post a week from today.