Scarecrow is Rhonda Parrish’s third Magical Menagerie anthology, released as a sort of partner and complement to Corvidae. The works are largely unrelated to those of Corvidae (reviewed here), but they carry similar themes, since crows and scarecrows go together like peanut butter and jelly. Or maybe I should say chocolate and bourbon. Because this anthology definitely starts out sweet but takes a bitter twist and ends with a smoky finish.

“Scarecrow Hangs” by Jane Yolen is a poem with an old-world feel to it, harkening back to the pagan roots of scarecrows, but throwing in a dreamy pop-culture reference as well.

“Kakashi & Crow” by Megan Fennell throws us right into an urban fantasy with old roots. Johnny Crow, a prophesying wiseacre, is called upon by his nemesis Kakashi, the scarecrow of judgment, to join forces against a common enemy. We’re given a lovely blending of Native American and Japanese mythology, all in a setting that will delight fans of C.E. Murphy’s Urban Shaman series. 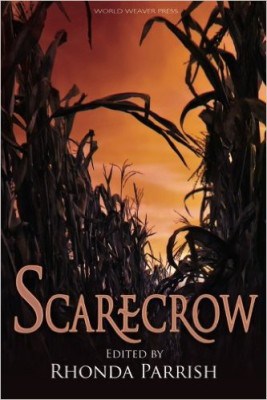 “The Roofnight” by Amanda C. Davis begins as an adventurous beaurocrat’s attempt to uncover a smuggling ring, but ends as something both more prosaic and more magical. We have scarecrows, but they aren’t performing their traditional roles in this story.

In “Skin Map” Kim Goldberg delivers a story rife with symbolism. In a world dominated by electronics that burn the mind and the skin, the main character makes a decision motivated by kindness, but with a gruesome ending.

“A Fist Full of Straw” by Kristina Wojtaszek is a bittersweet tale of a scarecrow in love with a human. Told from alternating points of view, it’s a brief and magical glimpse at two lives as they cross. I confess that I didn’t enjoy it as well as I might have, because of the human’s married status–infidelity is a turn-off for me–but the writing is lyrical and evocative.

“Judge & Jury” by Laura VanArendonk Baugh can be read as a stand-alone, but is actually a continuation of the melancholy ghost story she provided for Corvidae. Junsuke Hirata lost his life in a horrific crime, and now he’s hoping for justice. But justice appears to be for the birds. And sometimes, that’s the best justice of all…

“Waking from His Master’s Dream” by Katherin Marzinsky is set in a fascinating world where authors can bring their favorite characters to life. Antonio’s ficcion is a straw man named Strel, someone who is like a brother to him. But tell that to his real life sister, who finds him in the hospital and tries to take care of him. What’s real and what’s fiction? It’s hard to tell in this story.

In “The Straw Samurai” by Andrew Bud Adams we’re immersed in Japanese mythology as we meet a girl who has never had any friend but a bamboo stick. Driven from village to village, but never losing her good-natured humor, Okamiko nevertheless longs to belong somehwere. When she finally discovers the true nature of her stick, she has to chose between friendship or being true to herself.

“Black Birds” by Laura Blackwood has a different, darker take on corvids. As Lisa goes about her daily life, a crow, a magpie, a jay, and a raven appear as embodiments of her depression, anxiety, self-doubt, and other negative emotions. If anyone was ever in need of a scarecrow, it’s definitely Lisa…

“Edith and I” by Virginia Carraway Stark is narrated by a scarecrow. It takes the form of a pastoral account of a growing season, presided over by the scarecrow and planted by Edith. In this story, too, we have echoes of the old, pagan past, rituals long since forgotten by most. As it drew to a close, I was left with a shiver.

“Scarecrow Progressions (Rubber Duck Remix)” by Sara Puls is the bizarre, haunting tale of a strange love affair (sort of) at a carnival somewhere in Texas. The narrator is fascinated with a girl who is convinced she is turning into a scarecrow. The carnival setting, the quiet fatalism of the story, leaves the reader with a lingering unease.

I had to read “Truth About Crows” by Craig Pay twice, and I’m still not sure I understand it. It takes place on a hard-baked planet lightyears away from Earth, where solar farming is a way of life for the main character, Laykah, and her father. There’s a mystery surrounding Laykah’s mother’s death, and how the crows–AIs created to scare off moles–are involved, and the implications are unpleasant. But the story sticks with me as I try to puzzle it out.

“Two Steps Forward” by Holly Schofield is a fun trip in time back to the 1920s, when all the hep cats are jiving and the narrator shows up at a farmhouse in Western Canada, looking for the person who invented an automated scarecrow. Full of the slang of the period and strong characterization, it’s a good story.

In “Only the Land Remembers” Amanda Block gives us a haunting account of a girl who agrees to go beyond the borders of her town as a sacrifice to chase away the untamed spirits–to scare the crows away. She prepares herself according to her strong faith and her town’s traditions. But when the night comes to scare the crows, will she be able to face the truth?

“If I Only Had an Autogenic Cognitive Decision Matrix” by Scott Burtness deliberately plays with The Wizard of Oz, using characters as mission designations during an off-world mining expedition. Advanced AI Scarecrow is intended to interact with indigenous life forms and keep them from interfereing with the mining. But Tin Man has been experimenting, and those involve a lot of trial and error…

All in all, Scarecrow has a darker tone than Corvidae. At the same time, there are lovely interspersions of light and whimsy. There’s joy and love and sorrow and rage, struggles for survival and struggles for remembrance, all blended perfectly by Parrish’s deft editorial hand. This is a strong third entry to Rhonda Parrish’s Magical Menagerie series.