What I’ve Learned About Writing From My Cats

Here’s the blog post you knew was coming. The crazy cat lady is going to try to say writing is like being a crazy cat lady. But hear me out!

Every project is different.

Strider takes kitty Prozac because he pees in inappropriate places. It’s something that started after I brought in my third cat, Eustace, and Strider doesn’t have any health problems, so I know it’s behavioral. He’s marking his territory. Strider hates his medicine. We went through about a week of wrapping him up like a kitty burrito in a towel and squirting the stuff down his throat, but it’s a two-person job and my dad got tired of doing it. And we both got tired of ending up bloody, because Strider is a super sweet cat until you try to give him medicine (or take him to the vet). So I started mixing his medicine in his food.

Punkin, the FIV-positive foster cat who lives in a heated apartment in my garage, has been taking antibiotics to clear up an upper respiratory infection. Punkin is a sweetheart who wants nothing but love and pets. And a furever home where he can get those all the time instead of just sometimes. If you live in Indiana (or one of the states surrounding Indiana) and promise to keep him inside, let’s talk. Punkin doesn’t like having medicine squirted in his mouth, but he will lick it off a plastic spoon no problem.

Every cat is different. So is every project.

Since I’ve been feeding Strider canned food for his medicine, and Eowyn canned food to help her lose weight, I’ve accumulated a lot of little aluminum cans. It so happens that the city where I work has two different recycling places that pay for aluminum. So I’ve started keeping those cans in plastic bags on a shelf in the garage, so I can eventually turn those in for some cash.

Similarly, I can recycle a lot of my writing.

I never delete anything permanently. If I’m revising a story, I always have a Word document called “Cut from [Title of Story]” where I paste anything I take it. If it doesn’t work for this story, it might work for a sequel or for a different character in a different story. 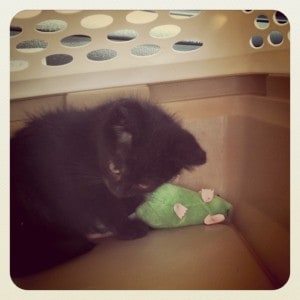 Strider on the day I brought him home

Strider is a very special cat.

When I adopted him, he had a decided head-tilt. My vet said Strider had probably had a middle ear infection early on in life. It has never affected his balance, and he’s mostly grown out of it, but I do sometimes wonder if that’s why he has a tendency to run in circles.

Strider also has some fine-tuned nerves. If I haven’t had an allergic reaction in a few weeks and I sneeze, he hits the roof. If Eowyn jumps on the bed when Strider’s just getting settled down, he’s off like a rocket, usually leaving bloody gashes on my lap.

And I already mentioned the peeing-in-inappropriate-places thing. Let me tell you how not fun it is to wake up to the smell of cat pee emanating from the curtains next to your bed.

It takes a lot of patience to be a good cat mom. But it’s infinitely worth it.

Sometimes it takes a few tries to get it right.

You would think that in a house full of cats, mice wouldn’t be a problem. But I live in the country, so every autumn a few mice decide moving into my house is a better option than migrating to Florida. Eowyn won’t stand for this, so she takes up a guard position at the first whiff of rodent, and she always gets her mouse. One week she actually caught an entire family–one adult and four or five offspring.

Problem was, Eowyn couldn’t figure out how to kill them.*

Her idea of what to do with a mouse was “take them to Mom’s bed and play with them,” which did not thrill Mom, let me tell you. Fortunately both times she did that (that I know of) I was there to grab her and carry her, mouse in mouth, to a better place for it.

I found a big cardboard box and put her in the box with the mouse, where she tried to figure out what to do with it. This was a long process that involved her getting bored and leaving. Strider tried it a couple of times and couldn’t figure it out either. So I gave Eustace a shot, and he didn’t know what to do with it either. In fact, we learned together that a cornered mouse will both bite the paw that’s playing with it and jump onto the back of a cat that looks like the only path to freedom. Eustace got tired of that pretty quickly and left the box.

So I put Strider back in the box. He grabbed the mouse and jumped out of the box, so I put them back in and covered the top of the box with some plexiglass. Strider immediately went to jump out again, mouse in mouth, and hit his head (not hard, I promise). Best I can figure it, that forced his jaws to close on the mouse, because when Strider dropped the mouse, it was dead.

It took a few tries, but Strider killed the mouse. And the next time I put him in a box with a mouse, he said, “I know what that’s for!” and with two snaps of his cute, fuzzy little jaws, that rodent was history.

When I was working on Stormseer, I wrote 20,000 words that just weren’t working. I had a brainstorming session with one of my critique partners, and we figured out why those words weren’t working. And then I had to do one of the hardest things in the world. I threw out those words.

I did end up salvaging quite a few of them later on in the story, but I didn’t know that at the time.

It took a few tries, but I finally got it right.

It’s important to work every day.

If you’ve ever had a cat, you know they poop. A lot. Litter boxes are never fun to clean, but they’re especially not fun to clean when you’ve let it go for two or three days.

It’s so much easier to scoop the litter every day, or even twice a day. It takes less time overall, it keeps the boxes cleaner, and it makes both me and the cats happier. Who wants to go in a dirty toilet, after all? Especially someone with a keen sense of smell.

Similarly, a big writing project is a lot less daunting if you chip away at it every day. NaNoWriMo breaks down its monthly goal of 50,000 words into a mere 1,667 each day. If you miss one day of writing, you’ve got 3,334 words to write to catch up. And if you miss more than one day… Good luck!

Every since joining the Monthly Twitter Writing Challenge, I’ve been writing 500 words each day. That was one of my 2015 writing goals, and the Twitter Challenge has helped me achieve that. If I write just 500 words every day, I’ll end 2015 with two new novels. If I write more than that, it gets even better!

One pass is never enough.

While we’re on the topic of litter boxes, here’s another lesson I’ve learned from them. One pass is never enough.

I use clumping litter, which makes it a lot easier to clean the litter boxes, but since I have three cats, I have three litter boxes. It’s inevitable that by the time I reach the third box, someone has decided they have to go right now and hits up the first box. You know, the box I just cleaned. I’m OCD enough that I have to go back and clean that litter box again.

The thing is, with writing, you tend to reach the end of your first draft and think, “Hurrah, I have a novel!” Which is great and all, but I guarantee that if you go back to the beginning of the novel, you’ll think, “Oh, man, look at this crap!” and have to clean it up.

Of course, I think it’s a given that we writers are all crazy enough to believe our writing is simultaneously brilliant and crap. We wouldn’t be writers if we weren’t capable of complexities like that. :)

One pass is never enough. Two passes might not be enough, though thank goodness I’ve never had to test that theory with litter boxes!

Sometimes you need to take a break. 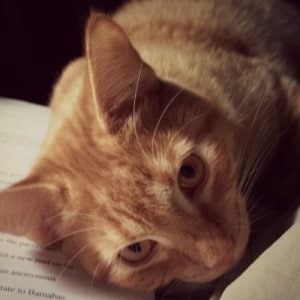 Eustace laying the guilt on thick

This is one my cats often teach me while I am writing. Strider and Eowyn are both in the habit of lying down on my keyboard. Strider likes to jump up on my desk and stand directly in front of my monitor so I can’t see what I’m doing. To be fair, he doesn’t care whether it’s social media, blogging, writing, or World of Warcraft. He just wants to be the center of my attention instead. And Eustace will just straight up put himself on my manuscript and guilt me into giving him love and attention.

But it’s a valid lesson. Sometimes you need to step away from whatever project you’re working on and spend time with loved ones. Or take a walk. Or clean the litter box. While it’s important to write every day, it’s also important to do things besides writing.

What other lessons can you think of?

I’m sure there are other lessons to be learned if you have dogs, horses, snakes, pigs, or parakeets. Or even kids! What lessons have you learned from your pets or children? (Sorry, I’m a child-free crazy cat lady. I tend to think my cats are kids, and kids are just large, slightly more expensive pets. :) )

* As a disclaimer, I’m not a fan of animal cruelty, but I do believe in the circle of life. Cats are designed to catch and eat mice, and I would much rather have mice killed in a natural way than have to set traps that may or may not kill the mouse cleanly anyway. I once had a mouse get caught in not one but two snap traps (on two different legs) and I still ended up having to ask my then-boyfriend to kill the mouse for me because I just couldn’t do it myself. So I don’t consider cats any crueller than traps. ↩