I have a little present for all my readers today–a WIP Wednesday from Circle City Psychic! This novel focuses mostly on Martin Cole, Chloe’s brother, and Elliott Blake, Braxton’s best friend. And because it’s Valentine’s Day, I decided to share a little snippet from early on when boy meets boy.

There were some strange compromises involved in having his sister marry a werewolf. 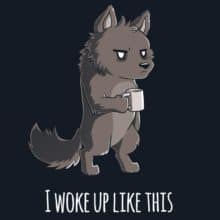 You know Elliott has one of these t-shirts!

The second weekend in June is too close to the Full. I want Braxton to be at his best, but I don’t want to wait until the third weekend. Chloe’s reasoning had involved the honeymoon plans, which was a two-week excursion to several of the southwestern national parks—Grand Canyon, Mesa Verde, Bryce Canyon, White Sands, and Great Sand Dunes. Apparently they had a four-night stay at the Grand Canyon, which would be long enough for Braxton to shift and recover from the full moon without putting a damper on their travel plans.

Martin had stopped asking questions back around Halloween, when he’d learned his sister was dating a werewolf in the first place.

Call it what it is, dumbass, he told himself. He’s seriously hot, and he’s seriously pissed at you for being the best man.

Martin hadn’t got Blake figured out. The guy was seriously hot—dark brown wavy hair, brown skin, freckles scattered across his nose—and he had a serious chip on his shoulder when it came to Martin.

I can’t wait until I can share the whole book with you! It’s currently still being revised and tweaked, but I hope I have a release date to share with you soon!