Book reviews aren’t my mainstay here on the blog, but I like to tell people about books I enjoyed, and I have to say that FAE is one of my favorite reads this summer. I read it just after it released, and weeks later, some of the stories are still sticking with me. 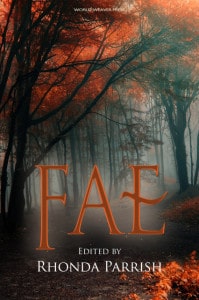 This was a well-selected collection of stories about the Fae, and it made me restless and twitchy in the best way possible–the way I always feel when I’m reading about the Fae, which means the authors collected here got it right.

I honestly liked all of these stories. I buzzed through the anthology in two days, which is unusual for me with anthologies. I have a hard time with short stories, both reading them and writing them, so I don’t read too many anthologies in general. Two things worked in FAE’s favor: all the stories had a common theme, and they were seamlessly woven together by editor Rhonda Parrish.

I’d be lying if I tried to tell you that “And Only The Eyes of Children” by Laura VanArendonk Baugh wasn’t my favorite story, but then I’m biased. I got to read this story as part of my critique group, and it made me openly envious that I hadn’t written it. Baugh captures the city of Indianapolis so well, and the narrative voice of the main character is perfect.

Other standout stories for me were “The Queen of Lakes” by L.S. Johnson, “Antlers” by Amanda Block, “The Fairy Midwife” by Shannon Phillips, and “The Cartography of Shattered Trees” by Beth Cato. Johnson manages to portray a vivid setting and well-defined characters, and I both admire and am frightened by the frank ambition of her main character. Block’s contribution to the anthology reads like a story I should already know–as if the story is already part of a commonly-held mythos. Shannon Phillips’ main character has an accessible and likable voice, and no character in this story is wasted. My favorite thing about “The Cartography of Shattered Trees” is the title, because that is an awesome title. I love the way past events are unfolded for us, and the agency her main character seizes for herself.

The other stories are also well-written. “Rosie Red Jacket” by Christine Morgan is a nice opening story, seeming to keep to the traditional fairytale structure, but sneaking in a frisson of dark fantasy. “Ten Ways to Self-Sabotage, Only Some of Which Relate to Fairies” by Sara Puls uses a list format I’ve seen employed before, and in Puls’ skilled hands, the format ties into the characterization of the main character.

In “Only Make-Believe” by Lauren Liebowitz we’re granted the rare first-person narration by one of the Fae themselves, and Liebowitz does it well. The world-building in “F.C.U.” by Jon Arthur Kitson seems sparse at first, but that gives the reader a delicious chill when you finally realize what’s going on.

“Water Sense” by Adria Laycraft was the one story that seemed slightly out of theme to me, since despite being a Charles de Lint fan, I don’t generally associate Native American spirits with the Fae. But the story had a rich setting and interesting characters, with a nice twist, so I’m not complaining.

“Possession” by Rhonda Eikamp surprised me by being perfectly set during the American Civil War, a topic I’ve studied for two decades or better, and yet had never thought of in relation to the Fae. “Seven Years Fleeting” by Lor Graham broke my heart in the best possible way. Parrish’s editorial comments at the end of that story reflect my feelings perfectly.

“The Last King” by Liz Colter was probably the sour note for me because of the theme. It’s a pet peeve of mine that so many of the fantasy classics–Lord of the Rings, the Prydain Chronicles, the Dark is Rising Sequence, and more–end with magic disappearing from the world. That said, it was well-written, and the theme is a widely-accepted one that obviously resonates with many people. The main character’s history is tantalizing, and the Fae characters we encounter are deliciously depicted.

I loved “Faerie Knight” by Sidney Blaylock, Jr. Halloween just screams for the Fae walking around, undisguised, and the main character is fabulous. This story reminds me of Roger Zelazny’s Last Defender of Camelot in the best way possible.

Kristina Wojtaszek delicately hints at a character with Asperger’s Syndrome or Autism in “Solomons Friend,” and she does it well. I love the POV Wojtaszek chose, and the two main characters shine.

One of the stories that most left me craving more was Alexis A. Hunter’s “A Fairfolk Promise.” The setting is both beautiful and chilling, and while the ending of the story is perfect, I found myself yearning to know what happened next.

The final piece, the short “The Price” by Kari Castor, is a fitting ending to this collection about the Fae–it touches on not only the promise but the price of dealing with the Fae.

All in all, Rhonda Parrish has done a masterful job of pulling these stories together into a rich tapestry depicting the constantly inconstant, paradoxical, lovable, terrifying nature of the Fae. This will occupy a permanent place on my bookshelf next to my used copy of Katharine Briggs’ Encyclopedia of Fairies.

Disclaimer: The image link is an Amazon affiliate link.