Last week, as part of my continuing series Self-Pub 101, I wrote about some of the lessons I had learned during the process of self-publishing my fiction. This week I’m continuing with specifically the pricing and marketing lessons I’ve learned. (Warning: This is a Very Long Blog Post.)

One of the best things about self-publishing your books is that you have a lot of control over the price. This is especially true with e-books, though it is true to an extent with all books. CreateSpace, for instance, won’t let you sell your books at a price that doesn’t cover the production cost. But they will let you sell the book at a price that covers production cost without turning you any profit, if you really want to.

Indie authors can play with pricing as much as they want. When I had Stormsinger enrolled in Amazon KDP Select, I could list the story for free on certain days. It was amazing how many copies moved during those promotions. I even got a review out of one of those free copies. Does it do me any good to give my story away? Well, sometimes.

Stormsinger is a novelette. It’s right around 8500 words, which is too long to be a short story but not long enough to be a novella. It’s an odd length, but it’s long enough to give you a taste for my characters and my writing style. If you get Stormsinger for free and like it, you might be willing to spent a couple of bucks on Stormshadow to find out what happens to the characters. Because I’m tricky, I have another reason free copies of ‘Singer might be good: I’ve updated the e-book to include a sample chapter of Stormshadow. I’m hoping that you’ll get hooked and buy the sequel before you’ve even closed the file of the first story.

People have different price points. If you’ve heard anything about the Amazon vs. Hachette negotiations, you’ll know that Amazon thinks e-book readers have a price point of $9.99, and no e-books should cost more than that. To be honest, my e-book price point for most books is somewhere around $7.99. Any more than that, and I start thinking I’d just as soon have a hard copy. There are some authors, though, that I would probably spend $15 for their e-book. And for indie authors? Honestly, I’m not going to drop $4.99 on an unproven indie author–even as an indie author myself.

Will I spend $4.99 on an indie author I know and like? Of course! There are plenty of self-published authors who put forth a great deal of effort into selling a polished story and polished product with polished punctuation. But for every one of those indies, there are at least two dozen slovenly indies who throw words on a page without editing, put it through the .mobi creator, and think they’re done. If I spent $4.99 and got that kind of product, I would be seriously pissed off. And I don’t think I’m the only one.

For more on this topic, check out Lindsey Buroker’s blog and Patty Jansen’s blog Must Use Bigger Elephants. 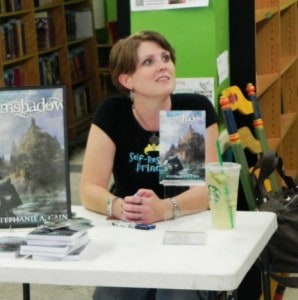 While I do a lot of marketing for my day job, I would never claim to be an expert. I read a lot of industry blogs and white papers, but I don’t have a formal marketing education. That said, I’ve learned a few lessons along the way–some of them painfully.

Facebook marketing doesn’t seem to be worth the money. For one thing, did you know Facebook ads are only allowed to have text on 20% of an accompanying image? And Facebook considers a well-designed book cover to have more than 20% text. How do you advertise a book without using the cover?

I’m not the only one who feels this way about Facebook advertising, by the way. Successful indie author Lindsey Buroker blogged about this just recently.

Don’t overlook networks just because they don’t seem related to books on the surface. I use Pinterest for inspiration, and it’s amazing how many book nerds I mean, readers, are on Pinterest. People Pin the covers of books they want to read, quotes from books they love, fanart of book characters. I make my inspiration and research boards public because it might pique someone’s curiosity. For instance, I rePinned an image of a girl with gorgeous blue-black hair because my character Arama Dzornaea has blue-black hair. I’m pretty sure that, as of this writing, that image is my single most rePinned image. Do all those people buy my books? No, but they do see my comment, “This is the color of Arama’s hair in Stormseer and Stormsinger.”

The potential pitfall of Pinterest, of course, is that you can lose entire afternoons doing “research.”

Email lists are important. This is something that is hammered home in a lot of books I’ve read. Chris Guillebeau and Tim Grahl, for example, both talk about how important it is to have an email list, and how many books your subscribers will buy compared to people who follow you on Facebook or Twitter. I believe them, but I honestly don’t have a very big email list yet, so I can’t speak through much experience.

I can say a couple of things, though. As a consumer, I’m very selective about who I allow into my inbox, so when I think about creating a newsletter as a creator, I try to keep that in mind. I have to respect the time of the people who allow me into their inbox. I have to respect the privacy of those people. And I have to do my level best to never annoy them.

People who subscribe to my email list have come to author events I’ve been at. They’ve bought my book. They’ve encouraged me and reviewed my books and been wonderful people to talk to. I have to make sure they know just how much I appreciate that, and never spam them, never send too many emails, and most of all, try to add value to their lives every time I send an email.

Unfortunately, it isn’t easy to get email subscribers. Maybe I’m going about it wrong. But I have some very nice bookmarks that invite people to sign up for my newsletter list and offer them a free story in exchange for signing up. I’ve given out a lot of those bookmarks. Just at the two events I had in July, I gave away probably 100 bookmarks. From that I got 2 email subscribers. These aren’t even people who read my book and realized they hated my writing! These are people who took only the bookmark, could have gotten Stormsinger for free, and didn’t feel it was a fair trade to give me access to their inbox in exchange for a story.

That’s fine–but it goes to show that marketing your writing as an indie author isn’t easy.

And here’s my last piece of advice regarding marketing: You have to hustle. You have to make yourself talk to people. You have to attend as many live events as you can and talk about your book in person to as many people as possible. I know that’s not fun. Most of us started writing in the first place because we’re introverts! But it’s essential.

At both of my events in July, I sold my book to perfect strangers. How? I can’t say for certain, but I’m pretty sure it was because:

People can tell when something’s important to you. If your book isn’t important to you, why should it be important to them? Of course, on the flip side, if all you care about is selling your book, you’re going to turn people off. That’s why it’s important to talk about other books you like. I honestly love geeking out with people about books I love, so it wasn’t hard for me to tell people that if they liked Tamora Pierce’s books, they might like mine. When I overheard someone asking a store owner for a Juliet Marillier book, I jumped in and said how much I loved the Sevenwaters Trilogy and suggested they might also be interested in my book, which is similarly populated by strong female characters.

Oh, that reminds me…I lied, I have one more piece of advice, and it’s good for self-published authors and querying authors alike. Know your comp titles. You’d be surprised how many people asked me, “What are your books about?” and followed that up with, “So what authors are your influences?” or “What authors do you write like?”

Don’t ever say, in a fit of artistic indignation, “I don’t write like anyone.” Of course you do! If you aren’t like anything, how will anyone know if they like you? (Of course, that said, I’ve never been able to fully express why I love Patrick Rothfuss’ Kingkiller Chronicles so much…but he is the exception, not the rule!) I often start with a joke. “I’d love to say that I write like J.R.R. Tolkien. *laughs* But as much as I love his writing and am inspired by his writing, I can never pretend to be in his league.” This tells people that I’m a Tolkien fan, and that I am never going to claim to be “the next great inheritor of Tolkien’s legacy” or whatever complete and utter crap the blurbs try to convince you about every epic fantasy that comes down the pike.

The two authors I think my writing most resembles are Tamora Pierce and Robin McKinley. I know they have both written primarily for young audiences–Pierce for middle grade and YA, and McKinley for YA–while I write primarily for adult audiences. But Tamora Pierce was one of my earliest influences. Her first Alanna books (The Song of the Lioness)

came out when I was in the early stages of choosing for myself what books to read. I have always aspired to write about girls doing heroic things, and Tammy was one of the first fantasy writers to really write that. Robin McKinley also writes about female characters who do interesting things, what we today are calling strong female characters. And while I can’t claim to deserve a Newbery Award the way McKinley does, a girl can dream, right?

It is incredibly difficult to get people to review your book. Even your friends. Even when you tell them to be honest and that just a couple of sentences and a rating will suffice. And yet book reviews on sites like Amazon and Goodreads are incredibly important.

There are book blogs and book advertising services that won’t even consider your book unless you have at least 10 reviews, and most of them have a minimum average rating.

Readers are also influenced by reviews. At least, when I’m trying to decide what book to buy, I’m influenced by reviews. If I see a review that says, “This self-published book appears to have been professionally designed and edited and is free of grammatical and punctuation errors,” I am far more likely to take a chance on an indie author.

There are theories that reviews, both the number of them and the average star rating of them, affect Amazon algorithms. This has a direct impact on sales. If people looking for epic fantasy stories about pirates and princes don’t turn up Stormshadow in a search, how can they buy it?

That’s all for today…

But stay tuned. I’m sure I’ll learn a lot more, though hopefully not all the lessons will be as painful as paying for Facebook marketing that goes nowhere!

In the meantime, I’m interested in what you think. Why is it so hard to get someone to review a book on Amazon or Goodreads? And what can authors do to make it easier?