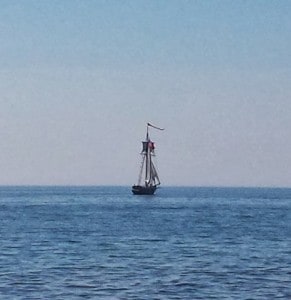 The Friends Good Will under sail on Lake Michigan

I was a double major in college. One of my majors was English–Creative Writing, which probably surprises no one. The other major was History. Not History Education, because I had no idea that was a thing until my senior year, by which time I was just good and ready to be out of college, thank you very much. Just plain History. So it shouldn’t be a shock when I confess to being a research nerd.

I love doing research. In fact, I often get so caught up in the research stage of writing that I have to forcibly reroute my attention back to writing. I love learning stuff just for the sake of learning stuff, and sometimes I forget that I was actually trying to learn something I could apply to my characters or world-building.

I’ve spent a lot of years working in libraries (I think it adds up to a decade or so), and libraries are still a font of information for me. That’s because

I Use a Lot of Written Sources

It may surprise you that I start a lot of my research in the juvenile nonfiction section of a library. The beautiful thing about juvenile nonfiction is that it presents a lot of information in a very basic way. It’s a great overview, and it’s a great place to find more in-depth sources. It’s sort of like the print version of Wikipedia, except with slightly better accuracy rates.

Here’s a brief list of juvenile books I hit up before starting The Weather War and Stormsinger:

I particularly enjoyed Jane Yolen’s book Sea Queens, which gave me lots of names of female pirates to do further research. When I finished each book, I looked at their list of works cited and moved on from there.

I use a lot of adult nonfiction as well, but I’m very bad at reading entire books of adult nonfiction. No matter how interested I am in the subject matter, if it’s not narrative nonfiction, I find myself falling asleep. So with adult books, I tend to pick and choose what chapters or sections I want to read.

Other great print sources include National Geographic and trade journals for various trades.

The Best Research is Live Research 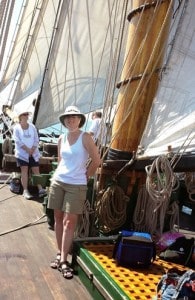 Me on deck of Friends Good Will

Of course, the best way to really bring your writing to life is to live through the experience you’re describing. If you’ve lived through something, you know how it smells and tastes as well as how it feels. You have so many sensory details to draw on and put into words.

So okay, I can’t actually ride out a hurricane or nor’easter on a tall sail ship. Wouldn’t even want to, though I wouldn’t mind sailing on some heavy seas to know what it feels like. Thankfully, I don’t get seasick, which would put a damper on researching this. :)

One of my mom’s favorite places is South Haven, Michigan. The Michigan Maritime Museum has a tall ship docked there. The Friends Good Will does two-hour passenger cruises at a very reasonable rate, so when Mom and I spent a couple of days in South Haven, we booked a cruise. I got to help haul up a sail and pick the brains of the knowledgeable (and generally awesome) captain and crew. The historical Friends Good Will started life in 1811 as a merchant sloop, but was seized by the British in 1812 and renamed H. M. Sloop Little Belt. She was outfitted with three guns, including a 9-pounder. In September of 1813 she was captured by Commodore Perry in the Battle of Lake Erie. Sadly, that December she was burned by the British. The current Friends Good Will is an historic replica that set sail in 2004. She’s not particularly large, but she’s beautiful and an absolute joy on the waves of Lake Michigan.

Research ADD: The Serendipity of Tangents

This section contains spoilers for Stormsinger, so if you haven’t read that yet and don’t want to be spoiled, please skip to the end! :)

I’ve mentioned before that I wrote Stormsinger for Joe Konrath’s 8 Hour Ebook Challenge. I was already about 19000 words into The Weather War and I wanted to tell a related story. I did some brief research online trying to discover if a deaf person (one of my characters is deaf) would be able to feel whalesong through the deck of a ship. I never actually got a satisfactory answer to that, but Googling the words deaf and whale together brought me to some very interesting online articles about 52 Hertz, a whale of unknown species. 52 Hertz cruises the ocean singing a song that is different from other filter-feeding whales because of its relatively high frequency. Not only is 52 Hertz alone because of his different song, but he’s also following different migration patterns than any known whale species. He’s been called the loneliest whale on Earth. Listen to his song here.

The story hit me really hard. I’ve always been fascinated with whales (as I kid, I once hand-copied all the text from a whale & dolphin guide book). I love the ocean with all her mystery and depth and wildness. And the thought of a highly intelligent whale swimming through its life in the deep, cold loneliness of the sea wrenches my heart. I can’t fix problems for the real Hertz 52, but I could and did write a story that brought companionship and understanding to not only a possibly-deaf whale, but also to a positively-deaf woman who knows what it’s like to feel alone in a world of creatures unlike herself.

Would I have told the same story without stumbling onto Hertz 52? It’s hard to say. I don’t think I would have had things happen quite the way they did, and telling his story gave Stormsinger its central theme about loneliness.

When It Comes Down to It, Research is Just Plain Fun

I already confessed to being a nerd. Doing research for stories gives me a good excuse to do what I would like to do anyway–learn stuff. When it comes down to it, there are a lot of books and articles I would read just to know what’s in them. Why not put that curiosity to good use and get a story out of it?

What’s the weirdest thing you’ve ever done in the name of research?