I am far from the most disciplined person I know. Two of my writer friends looked at my 2014 writing plan and made noises like they were impressed. It was tempting to pretend I’ve got it all together, but since both of those writer friends are selling more stuff than I am, it wouldn’t just have been dishonest, it would have been embarrassing.

So instead, I ‘fessed up that I only hit a small percentage of my 2013 writing goals, and that was after I revised my 2013 writing plan every quarter. (That’s built into my 2014 writing plan, too, but I’m hoping I’ll make fewer changes this year.) In the interest of preserving at least some of my dignity, I’m not going to go over the numbers of 2013 with you. For one thing, despite having a plan, I didn’t do a very good job of tracking stuff last year. I started tracking stuff at some point during the summer, and did that so irregularly that my data just isn’t very good.

This leads me to my first rule of time management for writers.

1. Before you can manage your time, you have to know how you’re spending it. 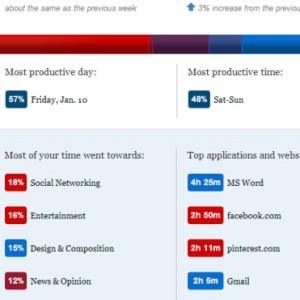 There are all kinds of time inventory sheets out there. I first encountered the idea in Julie Morgenstern’s book Time Management from the Inside Out, but you can find free printables or buy them on Etsy if you’re so inclined. I’m using a time inventory sheet from GetButtonedUp.com that really has all you need (there’s one for early birds and another for night owls, how awesome is that!).

Of course, there are other ways of tracking how you’re spending your time. For those who like paper and pen, the above sheet is probably the cheapest way to do it. For people who are into all the tech tools and gadgets, there’s a great app out there called RescueTime.*

Every week you get a summary email from RescueTime, telling you how you spent your computer time. (Premium users can also log offline hours, but I’m not using that feature right now.) The picture above is part of the summary email I got today.

2. To manage your time properly, you have to have goals.

As I mentioned in my post about my 2014 writing plan, I found a great article about how to use Google Calendar for project management. As I decided what I wanted to accomplish in 2014, I added everything to a separate calendar I created for my 2014 writing plan. I then printed the entire year and put it in my plan-everything binder. Now I have no excuses–for every day of 2014, I know what I’m supposed to be working on in order to accomplish all my goals.

That doesn’t automatically guarantee I’ll do what I’m supposed to on any given day, of course.

This is another aspect of time management where RescueTime can be beneficial. You can set goals at your RescueTime dashboard and it will actually email you/display a pop-up notification if you meet those goals (or break them). For instance, I have two goals set up: less than 1 hour a day of distracting time, and at least 1 hour a day of writing time (as defined by using Microsoft Word).

A much cheaper method is to simply set a timer. Anyone who’s done NaNoWriMo can tell you how miraculous word sprints can be, and there’s a time management system called the Pomodoro Technique that actually harnesses the power of the timer. If nothing else, hearing a timer go off every 15 minutes (or 30 minutes or 5 minutes, if you’re really distractable) will make you more mindful of how you are spending your time.

3. Once you have an accurate picture of how you spend your time, you have to be willing to adjust accordingly.

I’ll be entirely honest with you, there are some days I want to do nothing but play Skyrim for 6 hours straight. I guarantee that would make RescueTime yell at me. Generally what I do then is…exit RescueTime before starting Steam.

If I were less vain, I would let RescueTIme track every single hour I spend in Skyrim so I would know how often I lost entire days to Skyrim. Sure, I would get an email saying I’d spent more than an hour on distracting stuff. Sure, it would make my week’s numbers look bad.

But I would be able to say, “This week, I finished a short story and submitted to five markets, so as a reward, I played four hours of Skyrim.” Or I would realize, “Wow, this week, I totally bombed on submissions and didn’t even finish the chapter I said I was going to,” and then conclude that Skyrim is healthier consolation than drinking.

I’ve been known to deny myself reading a book I’ve been waiting for for months just because I haven’t met my writing goals for the week.

There is a great feature of RescueTime that helps with adjusting your behavior. It’s called “Get Focused”, and it allows you to block Very Distracting sites for a length of time you specify. For me, that’s going to include sites like Facebook, Pinterest, Twitter, etc. If I suddenly had a burning need to visit one of those sites before my specified time was up, I would have to actually reboot my computer. RescueTime doesn’t let you “Quit Rescuetime” if you’re in the middle of a “Get Focused” period.

When it comes down to it, Jane Yolen has already shared the ultimate time management tip for writers: Butt In Chair.

I found a great post by Ingrid Sundburg about the connection between butt-in-chairness and craft mastery. When it comes down to it, you can’t be a master of the writing craft if you haven’t figured out a method to plant your butt in the chair and write.

So there it is.

I’m far from perfect, but these are a few of the things that work for me (with at least some level of success). I know at least two writers who I swear never sleep, because they somehow have time for all kinds of things I can’t squeeze into my schedule. Of course, they might also spend a lot less time on Facebook and Pinterest than I do…

So what about you? What are your favorite time management techniques?