I’ll talk a little bit more about what I mean by this, and I’ll give some of my favorite examples along the way.

A Strong Character is a Fully Realized Character

A fully realized character is someone who

For example, Hermione Granger. She is motivated by knowledge and learning. She wants to be a fully-fledged witch and be accepted as such despite being Muggleborn. She also wants her best friend Harry Potter to survive his many encounters with Voldemort. Is she flawed? Absolutely—just ask anyone who’s ever called her a know-it-all.

Going back a couple of decades, Eilonwy of the red-gold hair is motivated by her eagerness for adventure. She wants to be seen as equal to her male counterparts and to help Taran of Caer Dallben (despite his seeming inability to see her as equal). Her flaw is her temper, which tends to get the better of her at times.

You notice how I don’t say anything in here about kicking butt and taking names?

In my own fiction, Azmei Corrone begins her fictional journey as a princess who, while capable of using a sword in self-defense, doesn’t love it. She is motivated by her kingdom’s need for peace. She wants to help create that peace by agreeing to marry a prince she’s never met. Her flaw is her inability to read people well enough to make good decisions about whom to trust. Later in her story, she definitely grows into a kicking-butts-and-taking-names character, but she’s still motivated by her kingdom’s need for peace, as well as a strong desire to protect her family.

A Strong Character Has Agency in Her Own Story 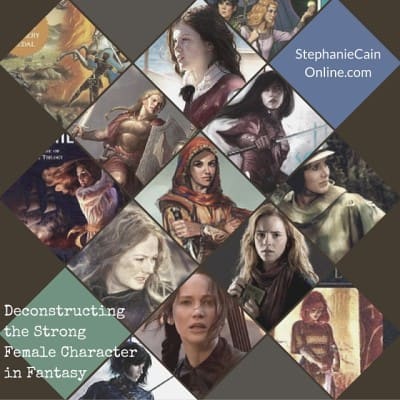 No one wants to read a story about a person who does nothing but react to the events in her life. Alanna of Trebond’s story would be totally different if she hadn’t taken the initiative to disguise herself as a boy and train to become a knight. What if Seraphina had gone blindly along with her father’s decision that she not create music or bring attention to herself?

It’s true that the character has to react to an inciting incident. That’s part of the structure of a novel, after all. Katniss’ reaction to her sister’s being picked as tribute is to volunteer herself. But once she has volunteered, she determines to survive the Hunger Games and devises a strategy to do that. Once she’s in the arena, she continues making decisions—to manipulate the cameras for medicine, to fool Peeta, and so on. Katniss takes a proactive role in her own life. She seizes agency in a world where there isn’t much agency to go around.

Think about what makes a good story: a character wants something, is faced with an obstacle, and has to overcome that obstacle to get what she wants.

Some of My Favorite Strong Female Characters

Eowyn of Rohan – Tolkien gets a lot of guff for having so few female characters, but he does a lot right with Eowyn, even with just a little bit of screen time. She’s frustrated with her role in life, playing nursemaid to a faltering king, but she does what she considers her duty. But in the background, you can tell she’s been training with a sword, because when she gets a chance to put on armor and ride to the defense of her country, she does so, defying the king she loves in order to serve him the best way she can.

Bonus content: ”I Am No Man” Doesn’t Cut It: The Story of Eowyn

Paksenarrion Dorthansdotter – The star of Elizabeth Moon’s The Deed of Paksenarrion– which is my second favorite series, after LotR – is definitely a strong female character, despite a lot of bad stuff being thrown at her along the way. If you haven’t read this, I don’t want to spoil it for you, but in the very first scene, Paks runs away from home rather than be forced into an arranged marriage. She joins a mercenary company and learns how to fight, and while she is occasionally reduced to reacting to events instead of planning her own course, there’s a plot reason for some of that. The audiobook version, by the way, is well done.

Seraphina – I only read Seraphina by Rachel Hartman this summer, after a recommendation at a writer’s conference, but I’m so glad I did! Seraphina doesn’t want much in life—just to make music and to keep her secrets from becoming common knowledge. Her father tries to keep her from being noticed, but she refuses to remain hidden. She pursues her dream of making music and becomes integral in foiling a plot against the kingdom.

Lucy Pevensie – I know this may seem weird, but Lucy’s a great character. She tells the truth, even when it’s unpopular, and she stands up for herself, even when her brother calls her a liar. In later books, she has the courage to follow Aslan when no one will go with her. If that isn’t agency, I don’t know what is.

Alanna of Trebond – The first Alanna book was published when I was nine. Just a couple of years earlier, after seeing Return of the Jedi in the theater, I had cut off all my long hair so I would look more like Luke Skywalker. (An added benefit was that I would also look like Frodo Baggins, another of my early heroes. And no, I’m not sure why I didn’t want to emulate Leia, who was pretty badass in her own right.) Probably to my mother’s relief, I didn’t cut my hair again because Alanna did. But for the first time I really had a girl character to identify with who was, unlike Eowyn, the star of her own story. I pretty much grew up alongside Alanna, so Tamora Pierce is one of those authors I will always buy in hardcover as a thank you for giving me a lady knight to admire.

These are just a few of my favorite Strong Female Characters, but there are dozens more out there. Who are your favorite SFCs?