There’s been a lot of silence over here, hasn’t there? I was in a huge slump, so I decided at the last minute to do NaNoWriMo this year–with a completely different project and absolutely no outline.

It was definitely a good decision! I’ve written 8 days in a row and I have 14, 746 words, which means I’m almost a full day ahead.

I’m also posting my words daily at my Patreon, unlocked to all supporter tiers. That means for a pledge of $1 or more, you can read the novel all month long, and you can cancel at any time to avoid being charged another $1 in December.

I can’t tell you what it’s about, because I’m still discovering that, but it’s epic fantasy and there’s a big, capable, ace female heroine and a mysterious vagabond who seems to be running from something. Here’s the opening paragraph:

The war was over.

The irregular soldiers who’d fought for the baron were straggling home, lean and hungry-eyed. Their clothing in tatters, their bare feet frost-bitten from icy spring mud, shoulders slumped, they were straggling home. Home, to markets with little merchandise, to farms left fallow for a year, to root cellars filled with more spiders and rats than roots.

The war was over, and the baron had lost—his war and his head—and all the loyal crofters, carpenters, and blacksmiths who had left their homes to fight under him returned worse off than they had been before the rebellion.

They returned home to parents too aged to keep farmsteads tended, to children too young to do more than gather eggs, to lovers who had not kept faith.

The soldiers had kept faith with their baron, and they had been ill-rewarded for it indeed.

The war was over, and Abigal Cooper was tired as hell.

And because I like doing imagery for my writing projects, I generated some Midjourney AI images to capture the mood & tone of the story. Here’s the image I’m using as a “cover” for the moment. 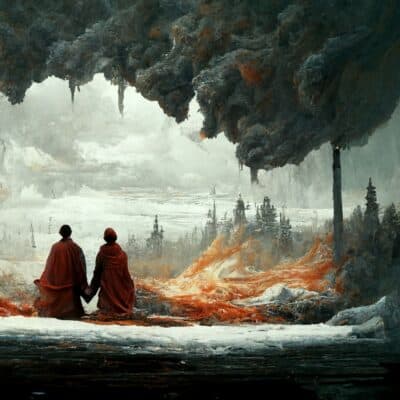 If you want to keep reading, jump over to my Patreon, pledge $1, and you’ll have access to read the entire work so far, plus daily updates as I write.