No Capes and No Action Figures

I’m an only child, and growing up I was what they called a strong-willed child. I’ve always been very close to my parents, but I’ve also always had my own mind, and I’ve sometimes been crazy stubborn about following my own mind. I hope I’m not the only one who looks back on certain instances in childhood and just cringes.

One of those cringe-worthy moments was over a lunchbox. I must have been a first or second grader because I was obsessed with The Secret of NIMH, which came out in 1982. I knew that at some point I’d seen a tin lunchbox with art from the movie, and I was determined to have that lunchbox for my own. Unfortunately for my parents, they couldn’t remember where I’d seen it–and of course I couldn’t–and they couldn’t find it anywhere.

And they looked, believe me. My dad would have done just about anything for his little girl. (Still would, in fact.)

In desperation, my dad offered me an alternate lunchbox. For some reason, my memory suggests we were at K-Mart when he held out a blue and pink plastic Mickey Mouse Ice-capades lunchbox and suggested maybe I would like that one.

I honestly can’t remember if I pitched a fit or if I just think I did. All I know is that I did not leave that store with a Mickey Mouse lunchbox. And that to this day I have a tin Secret of NIMH lunchbox that my dad somehow managed to locate for me. It’s one of my treasured possessions because I know just how hard my dad worked to give me that lunchbox.

It also makes me cringe when I think of how my dad must have felt, wanting to give me my heart’s desire but not being able to. 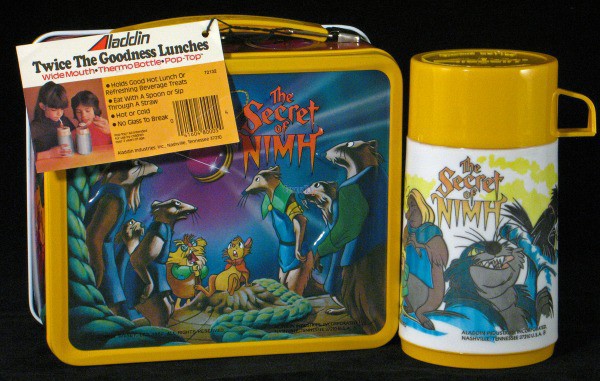 The lunchbox in question. I’m not sure where the Thermos ended up.

I was a Girl Scout as a kid. For a couple of years, my mom was our troop leader, and I think we had the most fun of any troop around–we actually got to do cool things like hiking and camping and other stuff usually reserved for Boy Scouts. We also did pretty well on earning badges.

I can’t remember what badge I was trying to earn when I had to make the hand puppet. I had to pick someone I wanted to be like when I grew up. Someone who was a hero to me. It seemed pretty obvious that I would pick my dad.

My dad had a good job at the time. Sometimes he had to work late shifts, and sometimes I even got to visit him at work, which was awesome. They had a huge walk-in freezer at his work, and I especially loved visiting the freezer in the middle of summer. Dad’s official title was Inventory Control Clerk, and he wore dark blue work shirts.

Here’s something that got written on a lot of my report cards: “Very intelligent but doesn’t put forth effort.” You’d think I would put forth effort when it came to creating a work of homage to my hero…but I totally half-assed that hand puppet.

I used a brown paper bag, the kind you brown-bag your lunch in, and I drew a face on it. Then I slapped glue on two pieces of blue cloth. They weren’t even cut evenly.

I have no idea if this is a true memory or just my own feelings on the puppet, but in my mind, my dad was really excited when I picked him to make a puppet of…and crushed when he saw the shitty job I did making that puppet.

I still cringe thinking of how my dad must have felt, believing that I called him my hero but didn’t bother doing my best for him.

I don’t have a picture of the puppet. Thank God. It would just make me feel even worse.

When I was ten or so, my dad’s company closed. He was left without a job about three months before Christmas. Our church stepped up and helped us buy food, my grandparents loaned us money, and we tightened our belts. But Christmas… I can only imagine how much my dad must have dreaded Christmas.

Kids always have huge lists of things they want from Santa, don’t they? And I was no different. I have no idea what my Christmas list was like that year, but it certainly had a pony on it, and probably a play kitchen and an Atari and all kinds of pie-in-the-sky dreams.

Spoiler alert: I didn’t get a pony for Christmas that year.

What I got instead was the best Christmas I have ever had. My dad pulled things out of the Dumpster at his job. He took cast-off items as people cleared out their desks. He cut pictures out of National Geographic and pasted them on three-ring binders that had once held inventory reports.

I can’t name everything I got for Christmas that year, but I can tell you I still have those three-ring binders. I still love those three-ring binders. One has whales on it. The other has horses on it. I was passionate about both, and my dad knew that. He couldn’t buy me a pony for Christmas, but he could show me that he knew I wanted one. He could show that he knew me.

And thank God I don’t have to cringe when I think about that Christmas. Because somehow I knew enough to realize that he was giving me everything he could, and doing it from the bottom of his heart.

But my dad’s been my hero for forty-one years, and I don’t see that changing any time soon.

So What is Giftmas?

So what is Giftmas and why are we all blogging about it? We’re trying to raise $522 (CAD) for the Edmonton Food Bank. We raised $521 last year, which is why the goal is an odd number. We’re doing a very short fundraiser–you only have until December 12 to donate, so donate now!

If you can’t donate, please at least help us spread the word about Giftmas and our fundraiser. A lot of authors and bloggers are coming together to do some great giveaways, which you can read about at Rhonda Parrish’s blog (she’s the one who organizes all this).