This week, I had several people follow me on Twitter. (I’m here: @stephanie_cain) Generally speaking, I take a look at someone’s profile and their most recent tweets before deciding if I’m going to follow back. I do follow most people back. But in the past few days, after following people back, I’ve received the following Direct Messages to my inbox (identifiers omitted, since my goal isn’t to shame specific people): 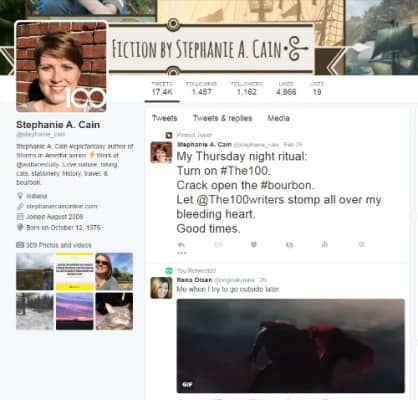 From a romance novelist: Thank you for the follow! Could you please spare me a few seconds and vote for my book? (Especially if you’re a huge fan of romance like I am.) You will be helping me an awful lot. As you’ll see, I have a long road ahead of me. Also, please check me out on Facebook.

From another writer: Thanks for following. Please retweet my pinned tweet and I’ll reciprocate. -via @crowdfire

From a writer and author whose blog I enjoy: Thanks for following! If you’re interested in my writing and art, check out my website [link redacted]. -via @crowdfire

Thanks for following me. If you get a chance check out my book here [link redacted]. -via @crowdfire

Something most of these Direct Messages have in common are the way they end: “-via @crowdfire”

It’s gotten to the point where I have kind of a grudge against Crowdfire. And that’s not really fair, because it looks like a useful tool. It’s just that authors, particularly indie authors, are seriously misusing this tool.

Social media is about relationships. (I can’t say this enough, so I’ll be repeating this in other rules.) And from my experience, the best thing you can do in any relationship, be it family, friends, coworkers, or romantic partners, is listen. People want to know you hear them and understand them. Or if you don’t understand, that you’re at least trying to.

Social media has changed how people relate to public figures, too. When I tweet to a brand about their product, I expect them to be paying attention. I expect that if I have a compliment, they’ll say thank you or retweet that. If I have a complaint, I expect a response. Even if they say, “We’re sorry you’re unhappy–email us here so we can fix this,” it’s better than total silence.

A lot of social media marketing experts recommend an 80/20 rule, where 80% of your content is NOT about your brand, and only 20% of your content is about your writing, your books, your appearances, etc. Other social media marketing experts hate the 80/20 rule because so many people take it literally. The truth is, there are no hard and fast rules about how much promotion is too much. You have to be willing to get to know the people you connect with online and find out what they want from you.

If you focus on being helpful to others, or being entertaining to others, or providing useful content to others, they’ll like you. They’ll retweet you. They’ll be interested in what you have to say about things. And then, on the rare occasions when you tweet about your own books, about sales, about new releases, author appearances, and whatnot, your followers will retweet that for you too. They’ll be more interested in helping you out because you’ve already helped them.

Bottom line, if you focus on adding value to other people’s lives, they’re much more likely to want to help you.

Twitter Rule #3 for Authors: Don’t send me a Direct Message (DM) asking me to buy your book.

Listen, I follow people on Twitter for a large number of reasons. Maybe  I like the things you tweet. Maybe I like your blog. Maybe I already own your books. Maybe I just wanted to connect with another writer. Whatever the reason, though, there’s a really good chance we don’t have a relationship yet. If you were at a party and a friend introduced you to someone, would the first words out of your mouth be, “Hi! Nice to meet you! Buy my book!”? Of course not! So why is it somehow okay for you to ask me to buy your book when we meet at an online party like Twitter?

Twitter Rule #4 for Authors: Don’t spam your timeline (TL) with tweets asking me to buy your book.

Twitter–and all social media, for that matter–isn’t about selling. It’s about relationships. I want to get to know you. I want to find out what you like, what you believe in, what you stand for. I want to see tweets about where you live and travel, your favorite books and movies, and pictures of your pets. (Not your kids. Just your pets.) Twitter is about making friends with someone. If I like you, I’m going to want to support your creative efforts. That desire will naturally make me want to buy your book. For that matter, I’ve purchased books from people I got to know on Twitter, even if they write in a genre I don’t normally read.

What I’m saying is, if you and I form a relationship, my buying your book will be a natural outgrowth of that relationship.

I have nineteen different lists on Twitter to help me filter down to certain types of people I want to listen to and interact with. Some of them are personal and some are professional–for instance, I have a Twitter list of writers and actors involved with my favorite TV show, The 100. I also have a list that just includes my critique group. But I also have a list of people who participate in the Monthly Twitter Writing Challenge, and a list of people who write fantasy and science fiction, and a list of people who read the types of books I write, and so on. It’s a great way to narrow down the firehose of information that comes across Twitter on a minute-by-minute basis, and a great way to actually find the people you want to connect with on a deeper level.

Book: Create Your Writer Platform: The Key to Building an Audience, Selling More Books, and Finding Success as an Author – by Chuck Sambuchino – I’m actually still reading this, but Chuck has a lot to say about how to form relationships with people online.

Tools: Tweetdeck (my favorite) and Hootsuite – Great tools for managing your Twitter presence, scheduling tweets, and especially for using lists to your advantage.