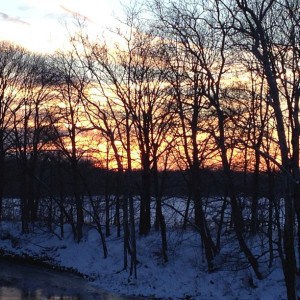 With the crazy snow coming down today, I thought this was an appropriate snippet. It’s from the story I’m currently working on–an urban fantasy set here in Central Indiana. One of the characters featured in this story is a character who appears in several of my other urban fantasy stories, including the novel I wrote for NaNoWriMo this year. She was popular with people in my writing group when I workshopped the first part of this story, and I like her a lot, even though she’s still a mystery to me, so I’m planning to explore her character in more depth this year.

The snowplows were out, but there were few other drivers. The staticky radio announced the schools had cancelled all evening activities and the county library was shutting early. Even the mall was sending people home. But the bars would be open. The bars always stayed open.

He eased into an angled parking space on 6th Street, his tires bumping against the curb. He switched off the ignition and listened to the ticking as it cooled for a couple of minutes. Then he sighed and climbed out. Lafayette had changed a lot in the years since he was living up here, doing his undergraduate degree in Ag. The farmer’s market had gotten a lot bigger, and there were wine bars and hand-made craft shops on Main Street now. But the Knickerbocker was one of the oldest bars in Indiana, and it hadn’t changed much.

I haven’t been to the Knickerbocker in years, but I used to go a lot, because they have amazing live blues on a frequent basis. One of my favorite memories is going there with a couple of friends to see the Clayton Miller Blues Band perform.

I love Lafayette and I love Central Indiana, and I’m excited to be writing stories set here in my part of the state. Hopefully I do them justice when describing them for readers.

Early predictions for today’s storm (Winter Storm Ion, seriously, who decided we needed to start naming these?) have us getting as much as a foot of snow in isolated spots. Who knows if we really will, but if you’re anywhere in the path of the storm, I hope you’re doing what I’m doing today–staying inside and keeping toasty warm with a fire, hot chocolate, and a cat on my lap!