6 Ways My Love For Nature Makes Me a Better Writer

I’m a nature nerd. I have been since I was old enough to listen to my Grampa Al when he pointed out animal tracks and different kinds of plants and trees on our walks together. Thanks to him, I got interested in bird-watching. Thanks to him, I’ll never forget that the Latin name for the Indiana state tree (Tulip Poplar) is liriodendron tulipifera. Thanks to him, I grew up hiking or camping at least once a week at a local state park. Thanks to him, I have a mother whose idea of the best Mother’s Day in the world is to take a picnic lunch and hike somewhere we haven’t been before.

Grampa Al died when I was eleven, but I’ve never forgotten the lessons he taught me, and I’ve never lost my sense of wonder when I look at nature.

1. Nature teaches you to pay attention to details.

If I want to identify a bird, there are some that are easy. Cardinals are red. Bluebirds and Indigo Buntings are blue. But if I have a brown bird with a white belly, is it a thrush or a cuckoo? (Insert groans at the horrible rhyme.) I have to learn to sit still and observe, to notice things like how long the bill is (long and curved on the Yellow-Billed Cuckoo), if the white belly is plain or streaked (streaked on the Wood Thrush). I have to notice if the bird waggles its tail, how it sits in the tree, and what it sounds like (only one type of cuckoo actually says coo coo coo). 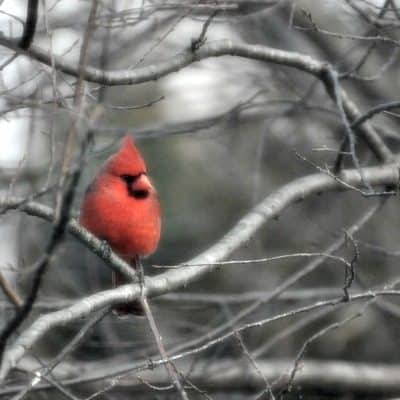 Details are key in making a story believable–in making a setting come alive for a reader–in showing rather than telling how a character feels about something. If we don’t learn to pay attention to the details, we can’t write them convincingly.

There’s a fairly popular mid-list author who writes fantasy (and no, I’m not going to name this author). I bought their books as soon as they were released. I loved the characters. But in one book, a character remarked that a crow had a zig-zaggy, silly way of flying. I haven’t bought another one of those books. It threw me out of the story, because I realized the writer had never observed a crow in flight. Crows, FYI, have one of the most businesslike flight patterns out there. If they’re foraging, sure, they hop around. But there’s a reason we say “as the crow flies” when we talk about the most direct route.

2. Getting out into nature makes my settings come alive.

While I haven’t yet set a book in Indiana, my state is full of various ecosystems that I can study and use in fiction. Are my characters slogging through a wetland? Great! I can visit Celery Bog Nature Area (which is actually a marsh) or Twin Swamps Nature Preserve in southern Indiana. Do I need rugged, hilly country? I don’t have to go any further than Shades State Park, which is also good enough to provide me with harsh limestone and sandstone cliffs and old-growth forest. I can’t quite find a desert in Indiana, but we do have Indiana Dunes State Park with its grueling Three Dune Challenge (dune it twice and have the sticker to prove it).

There are places in Indiana that could double for Appalachia or a backwoods village where a young shepherd is just waiting to learn he’s the Chosen One. There are lakes where I can rent a canoe and see what it feels like to glide across the water, the way a French coureur de bois might have traveled, or the way boat crafted in Lothlorien would. Caves? We have those, too, thanks to the karst topography of southern Indiana. Hoosier winters can be cold and snowy, our summers are hot and sticky, our springs are wet and tempestuous (we’re at the tag end of Tornado Alley), and our autumns involve frost on pumpkins and lots of crop harvesting. When I pay attention to all of that, I have the experiences to draw on when I want to describe just about any setting I want.

I can’t begin to tell you how many stories malign wolves just to get a Man vs. Nature story going. The Grey, The Day After Tomorrow, Frozen, Beauty and the Beast… The list goes on and on. The fact is, wolves are shy of people (as are coyotes, generally, and bobcats), and even someone who spends a lot of time a lot of time out in nature is unlikely to have a close encounter with a large predator. I have seen a fox while hiking, but no predator larger than that, even when I was hiking in wolf territory. And I know bobcats are breeding in my favorite hiking spot, because they’ve been documented by biologists, but I’ve never seen one.

Not to mention, herbivores are a lot scarier. Check out AineDubh’s awesome and hilarious Tumblr post, wherein she explains just why: “So if you’re deciding what kind of Big Scary Animals to have be a threat, like, forget wolves and lions and eagles and velociraptors. Go drop in a moose.”

Personally, I’d rather have an up-close-and-personal with a bear or cougar, because I know how to interact with them, than a frightened stag. There’s a reason the cowboys in every Western you’ve ever seen were afraid of a stampede. A herd of terrified cattle aren’t going to leave anything alive in their wake. (For that matter, just look at the modern sport of rodeo. Those aren’t crocodiles and tigers rodeo cowboys are trying to ride for eight seconds. They’re herbivores.)

Knowing this means I won’t give in to lazy storytelling and have a pack of wolves chase my character just because she needs a reason to run. That terrifying rustling noise she hears in the undergrowth could be caused by a squirrel. I know. I’ve had my heart stop a couple of times when I thought something huge was running at me, only to see a squirrel or rabbit digging around for food.

4. Spending time in nature recharges me.

We all need to recharge and refill our creative wells. Just getting outside and breathing fresh air recharges me, and getting out into the wild and going for a hike does even more. No one will argue that exercise is a bad thing, and hiking provides lots of cardiovascular and muscle-toning benefits, as well as making me a happier person. 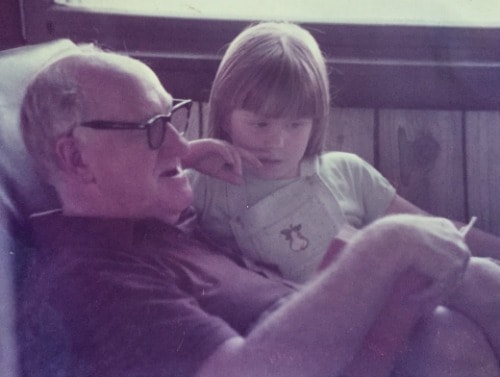 Pretty sure the book he’s reading to me is one about nature.

Getting out into the woods and having a brief encounter with a Barred Owl or a deer that leaves me breathless and wide-eyed is the best way to ignite my sense of wonder and joy.

No writer will argue with the fact that walking away from your keyboard is the best way to get a fantastic idea. In fact, my best story ideas usually occur when I’m in the shower, on the riding mower, or out hiking. This is why I always carry a Fisher Space Pen and something to write on–occasionally I’ve been known to use my own skin, if I don’t have paper, and that’s just embarrassing, so I’ve started carrying a pocket notebook. :)

Getting outside gives me breathing room. It gives me a chance to be away from the world’s pressures, to walk away from the computer and the artificial light and experience sunshine on my skin. And most of all, it gets me away from my story so that, when I return to the story, I have the energy to start again.

5. Loving nature has taught me how connected everything is.

Don’t worry, I’m not going to break out into “The Circle of Life” from the Lion King. But when you study nature, you start seeing how connected everything is. I’m terrified of spiders. It’s a pathological fear with no cause except how disgusting it feels to have those eight legs crawling on your skin. But when I go hiking, I have to slather myself in Deet to avoid swelling into one giant mosquito bite. I have no idea why, but mosquitoes love how I taste, and I react to their bites by getting a 50-cent-piece sized swollen spot. I have to admit, after a few bites, I have just a little bit of appreciation for spiders (but more for bats, which also eat mosquitoes and are way cuter than spiders).

A more scientific way of discussing this is the concept of the trophic cascade. According to Wikipedia, “Trophic cascades occur when predators in a food web suppress the abundance or alter the behavior of their prey, thereby releasing the next lower trophic level from predation (or herbivory if the intermediate trophic level is a herbivore).” A prime example of this is the wolves of Yellowstone.

I urge you to take four and a half minutes to watch this amazing video “How Wolves Change Rivers,” which illustrates this change.

What does this have to do with writing a good story? If you’re used to looking at how everything is interconnected, it makes working out subplots easier. It gives you the framework for spotting how the heroine’s action in chapter 3 is going to set off a chain of events that she won’t even notice until chapter 8, when it blows up in her face and alters her course to the goal.

Plus, it keeps you from making a stupid mistake like saying wolves are the bad guys. ;)

When I was up at the Indiana Dunes earlier this year, I walked past some sand sculptures the wind had created, and I took some pictures. To me, the sand sculptures looked like a plateau in the desert where obviously there was a secret city built into the cliff.

I take pictures of weird-looking trees and tumbles of rocks that are probably home to tiny, magical dragons. I peer into hollow trees (Almost had a huge spider eat my face doing this a couple of weeks ago, though.) and look for places where the fae might live. I have a folder in My Pictures called Story Ideas, and I flip through those photos occasionally when I’m looking for inspiration. Some of the settings and crazy things I’ve seen in nature are just waiting for the right story to be told there. Until I find that story, I’ll keep collecting these pictures.

Doesn’t that look like there’s a desert city built somewhere in that cliff face?

My Grampa Al instilled the love of nature in me at an early age, and my mom kept feeding that fire all throughout my formative years. Now that I’m an adult, when I need to recharge, I do one of two things: I pick up a book and retreat into the imagination, or I get outside and find my inspiration.

What about you? Are you a nature lover? How does it make you better at what you do?