Home My Writing Process Motivation Why Writer’s Block is Bullshit

Why Writer’s Block is Bullshit

Warning: As today’s post title might have warned you, this post will involve some language. It’s time for some tough love, and writer’s block is bullshit. 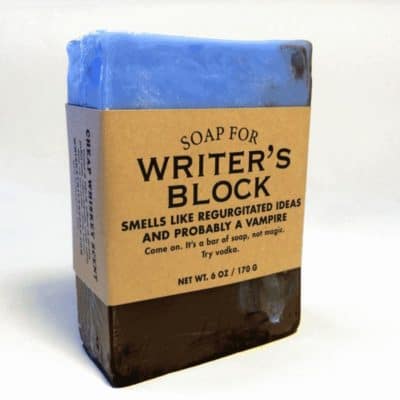 I’ve been a lazy writer.

When I look at my writing plan for this summer, I should have Shades of Circle City with beta-readers and I should have just finished writing the sequel. I should have plotted the third book in the series and be thinking about getting back to The Weather War while those stories rest for a while.

Instead, I’m still back in the middle of Shades, still switching things and tweaking characters and adding scenes. Why?

Writer’s block is bullshit because being a writer has nothing to do with my mood.

You get where I’m going?

My cats don’t give a shit whether or not I’m in the mood to write. They give a shit whether I can feed them every day. And in order to feed them every day, I have to make money. If I want to make money, guess what I have to do? I have to write. I have to be continually creating, continually putting out content that people want to pay me for. I can’t just tell the cats, “Sorry, not in the mood, you’ll have to go catch a mouse if you’re hungry.”

(Actually, I could. They’re very good mousers, and I live in the country, but that’s beside the point.)

Being a writer has nothing to do with my mood.

The muse is real, and his name is discipline.

Habit. Butt-in-chair. Whatever you want to call it, the only muse I have to serve is my appointment with my writing chair.

If I search “how to beat writers block” on Google, I get about 12.4 million results. Do you know what that means? There are 12.4 million people out there looking for an excuse to not write. I can say that, because for a long time, I was one of them. 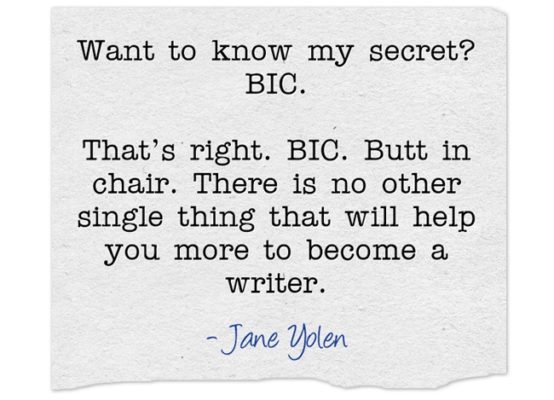 But the fact is, I know from experience that writing every day is not only possible, but it’s preferable. No, I’m not one of those “if you don’t write every day you’re not a real writer” jerks. But I do believe that I have to block out time to write, and I have to do so on a regular basis. I’ve been doing a great blogging course for the past three weeks (I’ll write about that soon, I promise), and something that is emphasized over and over during coursework is finding time for blogging.

I don’t know how to magically make time appear in my day, but I do know that if I block out time to blog (or write) on my planner, I get pissed at myself if I don’t do it. I really like putting checkmarks beside the completed items on my to-do list, and I really like keeping the commitments I make, especially to myself. When I block out two hours for writing on my calendar, it automatically makes me less likely to spend that time dicking around on Facebook or leveling my Disc Priest in Warcraft. Not that there’s anything inherently wrong with those things, but those things Aren’t Writing.

The fact is, when I make an appointment with my muse and keep it, he shows up.

Your story doesn’t give a shit about technical difficulties.

Lately I’ve been having trouble with Microsoft Word, a program I’ve been using to write my novels since approximately 1999. I’m getting a slew of appcrash errors, and once it crashes, it’s gone until I reboot.

I tried repairing the installation. I tried OffCAT, which was Microsoft’s suggestion. I tried reinstalling. In desperation, I bought a brand-spanking-new version of Office 2016, uninstalled every scrap of Office 2013 I could find, and did a clean install of the new version. Nothing worked. Still crashing.

Guess what doesn’t care about that? My story.

Fortunately, I spent last NaNoWriMo really wrestling my way through Scrivener, and in my frustration with Word this spring, I imported my latest novel into Scrivener. I’m now writing exclusively in Scrivener, though I’m not nearly as comfortable with it as I was with Word. Know why? My story needs to be written, and Scrivener is the tool that works.

So if writer’s block is bullshit, what do I do? 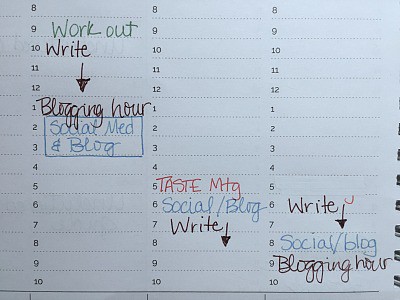 Exactly what I’m doing now. I fess up, then I fix up.

I’m redefining the term. Writer’s block is now the block of time I put in my planner to plant my butt in chair and get that story written. I’ve marked in writer’s blocks for the next several days in my planner. Of course I have to be flexible. If a meeting comes up, I can switch it around. But I’m not going to switch it just so I can get ticked off at political rants on Facebook. I’m going to see that schedule, and I’m going to make my appointments with the muse.