I’m at that point again.

Neil Gaiman wrote a great NaNoWriMo Pep Talk several years ago about the middle-of-the-novel despair. I’ve discovered that for me, it happens somewhere between 30,000 – 35,000 words.

I have a spreadsheet where I keep my word count progress for all of the thirteen years I’ve done NaNoWriMo. 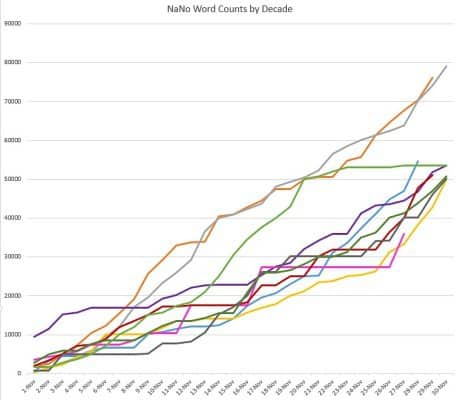 I don’t stall every year, though.

I’m not sure what I’m supposed to take from this, except that, while my writing has matured a lot over the past twelve years, my writing process might not have done the same. Stalling doesn’t necessarily mean I’m going to hate the novel when I finish it. It doesn’t even necessarily mean I’m going to crawl the rest of the way through the first draft. It just means I’m in that middle-of-the-novel despair.

…when I got three-quarters of the way through I called my agent. I told her how stupid I felt writing something no-one would ever want to read, how thin the characters were, how pointless the plot. I strongly suggested that I was ready to abandon this book and write something else instead, or perhaps I could abandon the book and take up a new life as a landscape gardener, bank-robber, short-order cook or marine biologist. And instead of sympathising or agreeing with me, or blasting me forward with a wave of enthusiasm—or even arguing with me—she simply said, suspiciously cheerfully, “Oh, you’re at that part of the book, are you?”

Isn’t that awesome? Even amazing novelists like Neil Gaiman feel this way. (Read the rest here.) Now, in general, I believe it’s best not to judge our success by comparing ourselves to other writers. But in this case, it’s good to know that a pro, an award-winning, best-selling, awesome-story-telling pro, is having the same emotions and problems that I have.

So how do we deal with the 35k Despair?

Here’s what I’m doing this year.

1. I’m revisiting my plot alongside a beat sheet.

Jami Gold provides several excellent beat sheet Excel templates, and she even has some Scrivener templates that go along with them. I’m not an expert at beat sheets, but fortunately she has some great explanations at her website, too. The main thing is, these are good tools for me to explore where I am and see how far I’ve come. Today I realized that I’m just about ready for an event that forces my characters to make a choice. That means I get to plot something fun and write it today!

2. I’m giving myself permission to slow down.

So I’m not making my 1,667-words-a-day quota. First of all, I was ahead of par until yesterday, so I haven’t lost much ground. But even if I had lost a lot of ground, I know I still have nine days including today. I can come back from this. I only have 15,503 words left to win, which works out to 1,722 words per day until then. Totally doable.

3. I’m surrounding myself with encouragers.

In my case, that means I’m haunting the #NovWritingChallenge hashtag on Twitter, where all my Monthly Twitter Writing Challenge buddies hang out. There’s so much positivity there, it’s impossible not to be encouraged. I’m also reporting my word count to fellow NaNoers, who are giving me all kinds of encouragement.

I’ve written before about my positive reinforcement (R+) methods. For every 250 words I write, I get a Hershey Kiss. Since 9 Kisses equal a serving, I have to write 2,250 words if I want my daily dose of chocolate. Maybe I can’t write that many. But if I can at least write 1,000 words, I still get 4 Kisses.

5. I’m using a timer to do short word sprints.

As soon as I finish this blog post, I’m going to turn off all distractions and turn on the timer on my phone. I’ll set it for 15 minutes and see how many words I can crank out in that time. Then I’ll get up, grab more caffeine, and start the timer at another 15 minutes. Usually by the time I’ve done a couple of 15-minute warmup sprints, I’m ready to set the timer for half an hour or even an hour and keep writing.

So those are a few of my methods. What about you? Do you feel the 35k Despair? If so, what do you do to cope?