I’m having a blast finishing up with Shades of Circle City! I’m still wavering between calling this novel urban fantasy or calling it paranormal romance. Either way, it’s very different from my Storms in Amethir books, but it’s a lot of fun to write. You can read the back of the book and sign up to be notified when it’s available on the book page.

For now, have a sneak peek inside Officer Chloe Cole’s head! Here’s a scene from early in the book.

Getting shot in the line of duty, Chloe decided, was not much fun. 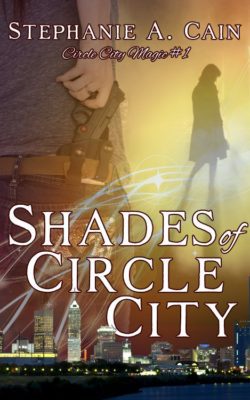 Lying around the hospital was boring. Her brother had had to go in to work that afternoon, and Jason had an approximate shit ton of paperwork to fill out about the shooting. They’d bought her a couple of steamy Harlequin romances from the hospital gift shop, which Jason had claimed embarrassed him to touch, but the morphine was making her vision swim a little, and even a mass market paperback felt too heavy for her to hold up for long. So she was watching Scooby Doo when an amazingly hot guy in a suit knocked on her door.

Okay, he was short, but still amazingly hot. Chloe heard a knock on the frame of the open door. When she looked over, he was leaning against the door, watching her. He had a trim, muscular build, and she could just tell he was short, maybe because he had a cocky air to him even as he gave her a friendly smile. Somehow that was more appealing than not. His hair was dark and just a little too long to be called a military cut. He was tanned, with little lines fanning out from the corners of his eyes. Chloe’s hand flew up to pat at her hopelessly greasy and ratted hair.

“Officer Cole?” he said, which gave him away immediately, of course.

Chloe groaned. “Let me guess. Internal Affairs. Or did the department already fix me up with a shrink?”

He laughed, earning him points in Chloe’s book and showing off some even, white teeth. “Neither,” he said. “I’m afraid it’s worse than that.”

He seemed to think that was an invitation to come in, instead of an appeal for holy intervention. He walked into the room and started to extend a hand, pulling out a badge to display for her.

“Braxton Wolfe. I’m with the State Police. I think you got shot by my bad guy.” He said his name without a hint of self-consciousness. That alone was impressive. But his last words made Chloe scowl.

“Hey, I shot your bad guy back,” she muttered.

“Yeah, thanks so much for not killing him,” Braxton Wolfe said. He dragged an orange vinyl chair over so he could sit and look at her easily. “I think he and his partner have hit a couple of places in Avon and Plainfield. I’ve been chasing those two yahoos for a few months now.”

“Yahoos?” she said, staring at him. Who the hell said yahoos?

“Yahoos,” he repeated firmly. “This was their first high-end job, and thank God they’re not as smart as they thought they were. They’ve been hitting pawn shops and that sort of place up til now. Didn’t know there’d be a silent alarm at Rice and Cauldwell.”

Chloe’s hair itched. She had a gorgeous man, even if he was a statie, sitting at her bedside, but with gauze taped to her neck and itchy hair, she was in no position to take advantage of it. Damn.

“Well, it’s just like you state guys,” she said, trying to sound offhand. “I do all the hard shit and you just breeze right in and take the glory.”